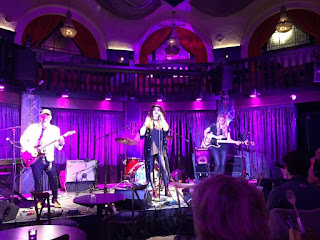 Brief review: Free show at the Bedford featuring a number of their favourite artists including the excellent "Ilo" (previously Ilona) who we've seen a few time now. She and the band were on good form and we even spotted Dave Boyce from the Quireboys in the audience with regular Ilo supporter Dave "Bucket" Colwell.

Brief review: You may think after 4 Who shows in 3 days, that a change of music would be required, but as this is the last appearance from the drummer "Moonie" - then we thought it would be appropriate to pay our resects. A great evening in a really nice venue (not been here before). 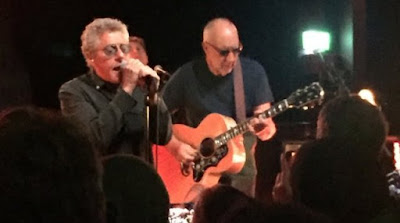 Brief review: The last of the 4 shows - and the first to sell out in seconds. This original one was to mark the 50th anniversary of "Live At Leeds". A nice "Live At Kingston" T Shirt was available (as was limited collectable lithograph). It has been a true honour and privilege to somehow grab tickets for these shows - and thanks to Banquet Records for putting them on and the Who for playing them.

Brief review: Show 3 of 4 - the early Friday show. 3/4 of the way though the residency. Still plenty of mistakes, but it's clear the band are enjoying these shows. As are the audience.Setlist
Substitute
Squeeze Box
Three Steps to Heaven (Partial)
Tattoo
The Kids Are Alright
Behind Blue Eyes
Break the News (Aborted and restarted)
She Rocked My World
Pinball Wizard
Won't Get Fooled Again
Posted by MatthewB2 at 3:50 pm No comments:

Brief review: Show 2 of 4 - the Wednesday evening show. Pete admitted that despite reservations, he and Roger were actually enjoying the shows. There was also a bit of a rant about the nearby Bentalls centre.Setlist
Substitute
Squeeze Box
Behind Blue Eyes
The Kids Are Alright
Break the News
She Rocked My World (with "Tattoo" intro)
Pinball Wizard
Won't Get Fooled Again
Posted by MatthewB2 at 3:47 pm No comments:

Brief review: Show 1 of 4 over two nights at the Prizm nightclub in Kingston. As you can imaging there had been a scramble for tickets from Banquet records for the Who's smallest venue show for 40 odd years. People had come from across the globe and after a slightly hesitant start and a few mistakes, the acoustic set was greeted with great enthusiasm. It included the live debut of a a couple of tracks from the new album, called "WHO".Setlist
Substitute
Squeeze Box
Behind Blue Eyes
The Kids Are Alright
Break the News
She Rocked My World
Pinball Wizard
Won't Get Fooled Again
Posted by MatthewB2 at 3:40 pm No comments: