A very short comment for this one. We were lucky enough to be in a box (with butler!) for this one (thanks to some friends kind generosity) which made the whole evening a fun one. I wasn't expecting too much from the setlist, but whilst disappointed they're weren't a few more Dire Straits songs that I might have known in the set, there is no doubt about Mr Knopfler's talent as a guitarist. It just all seemed a bit "safe" if you know what I mean.
Posted by MatthewB2 at 1:46 pm No comments:

As I said, you can't go wrong with these, so it was back to the Borderline for day 2, with the headline acts swapped around. The Quireboys repeated their excellent set from last night with just one minor change and once again it was very good.

Dan Baird on the other hand changed the set entirely with nearly everything different except for "Keep Your Hands To Yourself" and the excellent new track, "Two For Tuesday". Over the years, this is something he has always done really well. The evening ended with a rendition of "Battleship Chains" with Spike on vocals and a raucous crowd singalong. 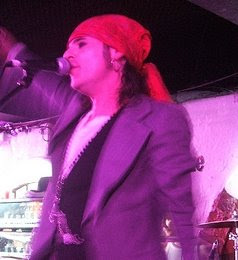 This show was moved from the Garage in Highbury & Islington due to ominous "health and safety" reasons. That meant a packed Borderline for the first of a 2 night "double header" of The Quireboys and Dan Baird & Homemade Sin.

The latter opened the show with a solid selection of their new album, Baird solo favourites and Georgia Satellites hits. Having seen Dan a number of times, he never fails to deliver a fun set and this was no exception.

Next up were the Quireboys. Again, a favourite act of mine and they gave a solid set of hits and selections from the new CD, "Homewreckers & Heartbreakers". We'd already seen the 2 guitarists in the pub pre-gig, but there was noticeably less "on stage" drinking than normal - maybe a sign of how seriously they are treating the new record.

So are they "XCom" or "Bad Company 2008"? Neither if Mr Rodgers gets his way, dubbing them a "tribute band falsely using the Bad Company name" and threatening legal action. Either way, Mr Ralphs and co were coming to South London and it seemed a good opportunity to see what they could do.

This was my first gig for ages and the first whilst recuperating from a recent op. Therefore needed to take things easy and was grateful for the relatively short set. This consisted of a smattering of Bad Company songs, "Can't Get Enough", "Feel Like Making Love", "Movin' On" et all and, bizarrely, 2 Free songs - "Wishing Well" and "All Right Now". Both classic songs of course, but a little strange given that none of the band played on the originals. All in all, whilst they are clearly not Bad Company with Paul Rodgers, I enjoyed the bands performance with Robert Hart up front and a fun time was had by all.
Posted by MatthewB2 at 1:16 pm No comments: