Second festival of the weekend - in Ealing for some "blues". Bad Influence get things off to a decent start. I also get to see a bit of Tim Stafell (ex Smile - pre Queen) and The Eel Pie All Stars before the early evening headliner - Nick Lowe.

The affable Mr Lowe jokes about getting the bus to the festival and about feeling a bit of a fraud, because "although I love the blues, I just write pop songs. Is it OK if I play some?". Of course it is and his acoustic performance enthrals the crowd for the next 75 minutes. Highlights include "I Knew the Bride" and "(What's So Funny About) Peace, Love and Understanding". All good stuff.

Evening headliners were "Who's Next". I have seen them before, but was surprised that they ventured toward the more "hardcore" elements of a Who set, based around "Live At Leeds" at a festival. To be fair, "Tattoo", "Fortune Teller" and "Heaven and Hell" can be heavy going for all but the hardened Who fans.
Anyway, after 7 hours on my feet, I headed to the exit as they approach their encore. Regrettably this meant I apparently missed "Long Live Rock". Ho, hum... next time maybe. And I will be back for the Ealing Festival - really impressed by layout and organisation. 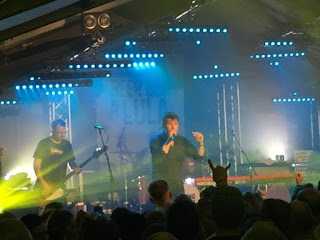 One Liner: First festival of the weekend and it's a goodie. First year of the Reigate Festival and Scouting for Girls are headlining. Similar format to the Oxted Beer festival last year - a decent tented stage area and good food and drink (and lots of beer) available around the outside. Family friendly too. A decent fun set - looking forward to their full show later in the year. 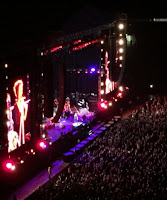 One Liner: Up in the Gods for this one at affordable "half price" seats. Bit too far away to feel involved, this was a decent, if not great show. I applaud Roger and Pete for trying something different, but 99% of the crowd don't really want an orchestra, they just want a small bunch of aging blokes belting out Who classics - ideally in a venue small enough where they can see them without the aid of a screen.

[With Orchestra]
Guantanamo
The Real Me
I'm One
The Punk and the Godfather (with Eddie Vedder)
5:15
Drowned (acoustic - Pete only)
The Rock
Love, Reign O'er Me
Baba O'Riley 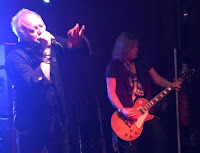 One Liner: Excellent show from Dave "Bucket" Colwell featured tracks from his new album, decent oldies and a smattering of Bad Company, Free and Humble Pie classics. Joined by Jimmy Kunes on vocals (helped by Ilona on backing vocals for 3 songs) this was a really good evening. Anyone got the setlist please?