Another week, another limited audience show. As a purchaser of the "Collector's Edition" of The Union's debut CD, I was invited (alongside the other 99 purchasers and a few competition winners) to a unique "warmup show" by the Union. Promoted by "Planet Rock Radio", the venue was the Gibson Guitar Studio in "Noho".

By the nature of the invitation list, a large pecentage of the audience were attending on their own and didn't know anyone. 90% were blokes, so it was quite strange in the pub beforehand trying to work out who was going or who was waiting for mates / girlfriend etc.

This strange scenario was relaxed slightly by the provision of free beer (thanks very much), but unfortunately it soon ran out !! The band went through a brisk 45 minute set (supposedly licensing restrictions prevented any longer) and were in the best form I've seen them. Once again, a fair few more punters could have been squeezed in if necessary. I chatted with a guy called Russ from the Midlands and we spent a few pints afterwards in the Pub putting the world to rights on Classic Rock and Football - good to meet you.

Looking forward to the full show in 10 days time.
Posted by MatthewB2 at 4:49 pm No comments: 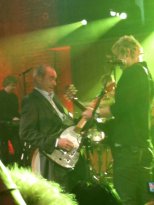 An exciting Wednesday night in St Lukes Church on Old Street. The Quo frontman has hired the venue from the LSO for a tiny gathering of fans and media (limited to 200 people) for a run though of his recent solo set for a DVD/CD recording.

Phil and I were able to stroll via the venue to meet Richard in the "Old Fountain" near Old Street tube where, unusually, we all sampled different beer (Bitburger for me, Peroni for Phil & Paulaner for Richard). After suitable refreshment we ventured to the venue to collect wristbands (subsequently unchecked!) and check out the cafe bar for more beer and in Phil's case, cake!

The venue itself was really nice, although could eaily have accomodated double the crowd if required. The sparseness ensured we were able to get a really good position and excellent view. Rossi and his band went through almost the same set as we saw in London in the summer and although it wasn't bad, it lacked the excitement or buzz of the earlier show. The band made a view mistakes, Francis forgot some words and we fully expected the encore to contain a repeat of a few of the songs which hadn't gone so well. That didn't happen, so I'll be interested to see if the DVD/CD do actually appear and if so, whether they are overdubbed. I read a comment on the Quo message board suggesting that Francis himself was a bit disapointed by their own performance.

So all in all, good, but not as good as last time.
Posted by MatthewB2 at 4:32 pm No comments: