Having enjoyed Mr Robinson at the SAS band Christmas bash last year, I was looking forward to this show. Refreshingly honest, he was upfront with the audience from the off, saying that all the hits would be played in part one of the show, Part two would be the soon-to-be released new album songs, so come back for that "only if you want to".

Well the first half was really good. I only really know his top 3/4 songs (and I'm the only person in the UK who doesn't know "War Baby" apparently!), but all was good. The stories between songs were entertaining and it's hard to believe Tom is 65 - he has aged remarkably well.

Second half was as promised ("If you've just come in, you've missed 2-4-6-8 Motorway - sorry!") and whilst I'm not convinced I'll rush out and buy the new album, was perfectly fine. Tom mentioned he'd been away for 19 years - please come back soon. 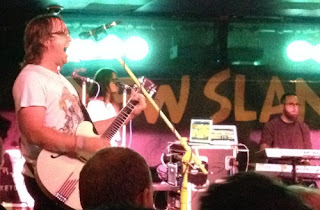 It now seems traditional for Wheatus to start any UK tour in Kingston. And for a £5 ticket, I am more than happy to "get down with the kids" at the Student Nightclub! Much emptier than on previous occasions, but no less fun because of it. The band started off with a few songs fronted by guest Mike Doughty (who has an interesting history - look him up on Google)

We got the full debut album plus a few more highlights. And even a Taylor Swift Cover ("Shake It Off") from the backing singers.

Singer (and only original member) Brendan B. Brown engaged well with the crowd and happily tells the crowd the title of each song and the album it's from. Sadly, I didn't write any of that down, so you're on your own for the setlist!