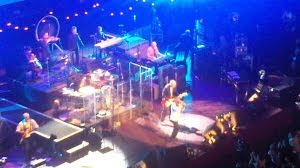 Another year and and another week of shows at the Royal Albert Hall in Aid of the Teenage Cancer Trust (of which Roger Daltrey is a Patron). We went for the "cheap" seats up in the "Gods", but had a decent 2nd row seat to the side. This gave a reasonable view for the Who's performance of Quadrophenia (played in full for the first time in ages). Sound was good and we got a couple of special guests in the form of the singer from Kasabian (Tom Meighan) as the Ace Face and Eddie Vedder (Pearl Jam).

A good performance all in all, only slightly marred by the complete lack of encore. For the money paid, I think the crowd would have been justified in expecting one. Subsequent comments from Roger may have suggested that his voice wasn't really up to extra songs on the night.
Posted by MatthewB2 at 11:47 pm No comments: