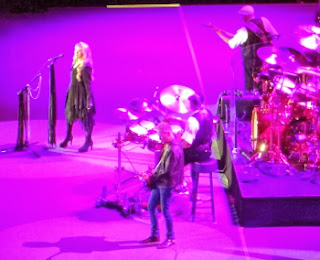 So, back for some more Fleetwood Mac - this time in the UK and back to the O2 again. And, thanks to some extremely generous friends, an evening in a corporate-style box with drinks thrown in... Lovely.

The setlist was identical to the show we saw in Tampa and the anecdotes were similar as you'd expect. Stevie Nicks vocals sounded better though and there was genuine appreciation from the crowd. We were slightly unluckily the Christine McVie only joined the band on the other 2 London shows and not this one, but you can't have everything. A really nice evening - thanks A&P! 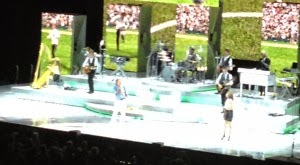 H'mm - not a great start to the evening. We'd taken a flyer earlier on in the day and purchased 2 below face value tickets from one of those "authorised secondary ticket sites" - you know the sort I mean. All comes with a guarantee and you print your own ticket etc. all good and feeling quite pleased with things until we get to the gate. Tickets rejected! No definitive reason given, but probably sold multiple times and used by someone else. This had happened to "loads of tickets" that night according to the gate.

With the company representative missing, we faffed around for quite a while before 'sourcing alternative tickets' for ourselves. This meant we had missed a good 40 minutes of the set, but at least we were in eventually to see just over an hour. And what a good 70 mins or so it was - Rod's voice sounded good, the setlist was pure sing-a-long and I think everyone would have left having enjoyed the show.

PostScript: ticket money refunded without question, however no explanation given. Any of the readers have good or bad experiences with these secondary ticket resellers - not the likes of ebay, but the semi-official authorised ones?

Setlist
This Old Heart of Mine (Is Weak for You)
You Wear It Well
Tonight's the Night
Havin' a Party
Rhythm of My Heart
Chain of Fools
Forever Young
The First Cut Is the Deepest
Have I Told You Lately
I Don't Want to Talk About It
Brighton Beach
Can't Stop Me Now
She Makes Me Happy
Maggie May
I'd Rather Go Blind
Soul Man  (Sung by backup singers; sung as "Soul Girl")
You're in My Heart (The Final Acclaim)
Sailing
Hot Legs
Baby Jane
+
Da Ya Think I'm Sexy?
Posted by MatthewB2 at 4:55 pm No comments: 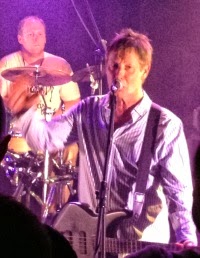 New town, new venue. We'll for those of us from south if the river anyway. It looks to an outsider that Enfield has a nice part - Enfield Chase, and a not so great part - the town. We found 3 nice pubs in the former - the riverside one being particularly pleasant.

The venue - the Dugdale Centre - is firmly in the town. It is a modern theatre complex and stands out from its slightly rougher surroundings.

In case you don't know, Woodedz are John 'Rhino' Edwards from Status Quo, together with his 2 sons, Freddie and Max. The audience - primarily Quo fans were here in support of this charity show raising cash for the local Papworth Hospital.

Not really knowing what material to expect, it was good to hear a large chunk of the Rhino's Revenge album, some obscure and not so obscure Quo tacks and a smattering of covers. The only downside was a dreadful song which appeared to be called 'Secretary' with truly cringe-worthy lyrics ("you want a double entendre, I'll give you one" etc).

Otherwise, well worth the tenner entrance fee and trip across town. Now if only the venue could afford a stage...
Posted by MatthewB2 at 10:51 am 1 comment: