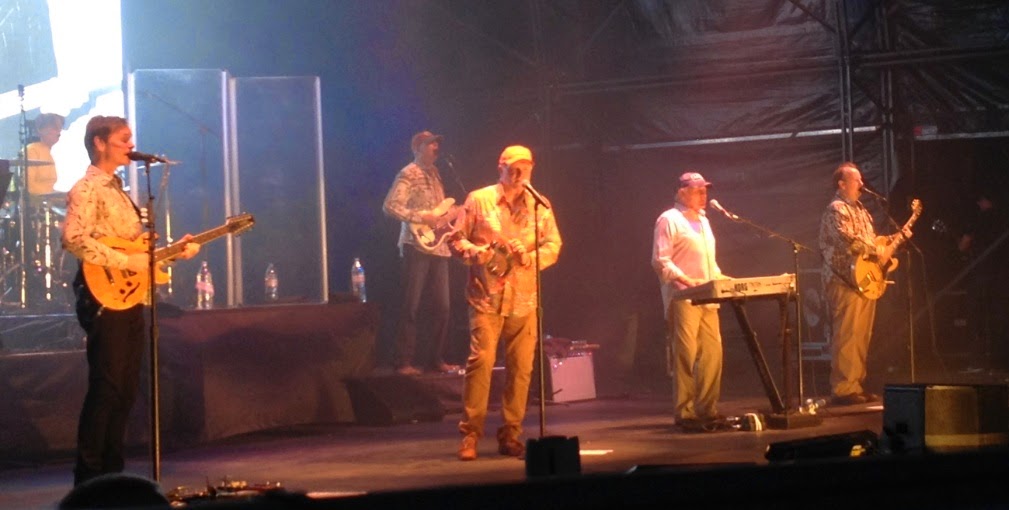 Another day, another racecourse! And a band of comparable age to last night. The Beach Boys are of course one of the legendary US bands of all time. They do leave themselves open to the age old question of "how many original members do you need to still be called [whatever the name of the act is]". Well in this case they have vocalist Mike Love who at the age of 73 is still touring the World.

To be fair, there are at least a few family connections with other band members as well as a returning guitarist from a previous lineup. The essence of the group though is displayed throughout with the classic harmonies and the surf-style guitar sound that they so helped popularise.

With the left hand side of the stage blocked by what looked like a completely unnecessary fence, the crowd sometimes had to shuffle round to get a good view. The good news at this type of show though is you generally get a bit more standing room than if you were going to a multi-band festival. they are also child-friendly.

Also, when a band has had as many hits as The Beach Boys, you want to hear them. They didn't let us down here, with the shortness of the original songs lending itself to a 28 song set, peppered with classics. Fun, Fun, Fun all the way.

Setlist
Do It Again
Goin' to The Beach
Little Honda
Catch A Wave
Surfin' Safari
Surfer Girl
Why Do Fools Fall In Love
When I Grow Up (To Be A Man)
Darlin'
Don't Worry Baby
Little Deuce Coupe
409
I Get Around
Sloop John B
Wouldn't It Be Nice
Then I Kissed Her
California Girls
Pisces Brother
God Only Knows
Good Vibrations
Cotton Fields
Kokomo
Help Me, Rhonda
Do You Wanna Dance?
Barbara Ann
Surfin' U.S.A.
+
Wild Honey
Fun, Fun, Fun

Many UK racecourses now do live music events, featuring and evening of Horse racing and a well known band. This one was quite close to home, but the first time I've seen any acts at Sandown Park.

As can be seen from the picture, the stage itself was quite large. What can't be seen is the huge sideways slope where the audience stands. In front of the left hand side of the stage must be several feet lower that the right hand side which makes standing a touch uncomfortable!

Still, after some success on the gee-gees (get in, "Needlessly Shouting"!), we took up a spot about 2/3 of the way back to the mixing desk. We had some Quo "first timers" with us who reported their enjoyment of the show later. For the Quo regulars amongst us, this was a decent performance, without being stunning. It's always a bit more difficult away from your own audience. Quo did their standard "festival set" (the same as at Download a month or two ago). It went down well, but it would have been nice if it was a bit louder! That seems to be the main issue with the race course shows - I think they have strict sound limits in place that aren't quite loud enough for an open air show.

From where we were standing the keyboards were far to high in the mix. This actually highlighted how good Andy Bown's playing is, but there is no disrespect in saying that when you come to see Quo, you want to hear guitars! 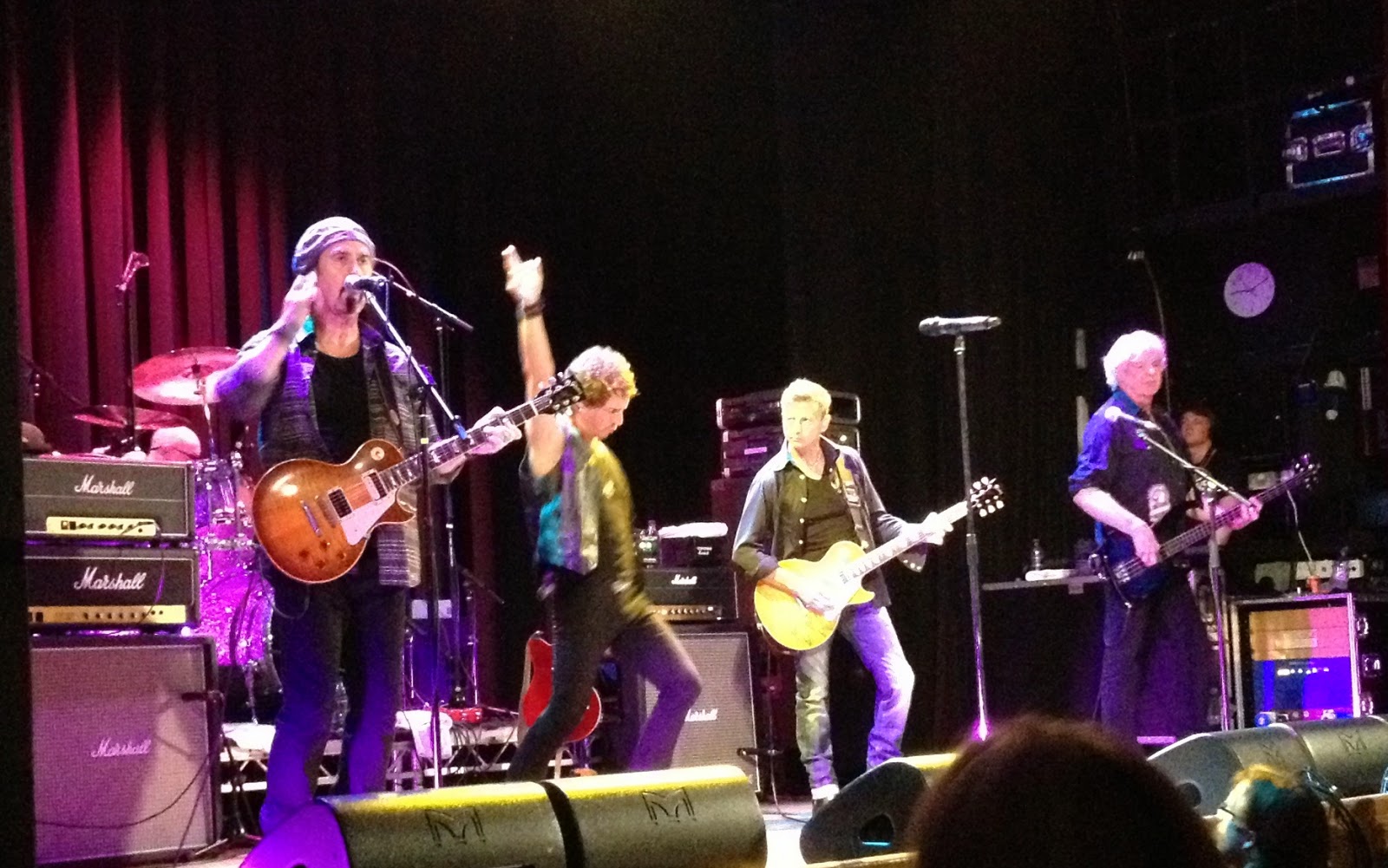 Islington for the upteenth time this year and this time it is a break in the World Cup fixtures and Snakecharmer at the Assembly Hall. The band have moved on from playing a 90% Whitesnake set to more a half and half set combined with promoting their excellent debut CD. A sparce crowd of only a couple of hundred were here to see it. From what I remember seeing online and in the press, the promotion for the show was a bit lacking.

Those who stayed away missed a good night. Fantastic playing and excellent rock vocals. I particularly like "Accident Prone" (no, not the Quo single). There was even the predicted sing-a-long for "Here I Go Again" and "Fool For Your Loving".

I'd have loved to have bought the signed vinyl album, but £28 priced me just out of the market - especially as I have the CD. I suspect I wasn't alone as they weren't exactly selling like hot cakes. 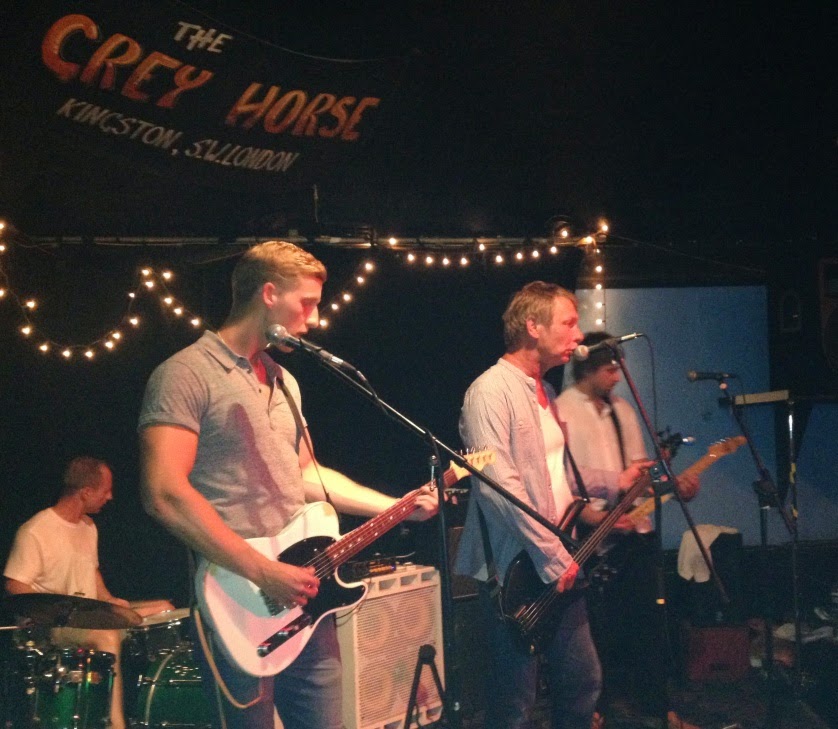 So after a gig-free June, a late announcement means it's 2 live shows on the bounce seeing Quo bassist John "Rhino" Edwards and Woodedz. On the night of the scarcely believable Brazil 1, Germany 7 World Cup Semi-Final, the band completed their 3 night "World Tour" with a headline show in Kingston.

The set turned out to be a bit longer than at Putney and as normal, the standard of musicianship was exceptionally high. Rhino, as I'm sure would be the first to admit, is not amongst the World's top vocalist and this was compounded tonight by what I assume was a severely sore throat. A new career as a 1930's bluesman beckons! Still, to be honest, that didn't really matter a jot as the smallish crowd of friends, family and fans lapped it up. Sounds like it may be the last show from the guys for a while - good luck to Max who is off to Germany to study. A new album is on the way though... allegedly!