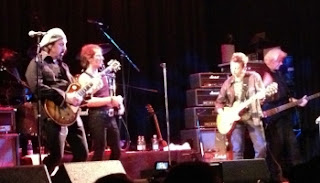 Another trip to Islington, this time a solo trip to a venue I'd never been to before - the recently reopened Assembly Hall. The venue inside has been nicely restored - there's no proper ticket office, so the £20 "on the door" fee unfortunately only got me a hand stamp, not a proper ticket. I grabbed a quick can of Red Stripe and headed for my standard gig position (down the front on the left) assuming that would be Micky Moody's side (it was).

For those who don't know, Snakecharmer includes ex-Whitesnake members Micky Moody and Neil Murray and had started life playing primarily old Whitesnake material. Tonight however, they were promoting their self titled album of all new material which is actually quite superb -
http://www.amazon.co.uk/Snakecharmer/dp/B00A3XWAU2/ref=sr_1_1?ie=UTF8&qid=1361885251&sr=8-1

The venue was busier than I'd anticipated and the show excellent, from the duelling lead guitars to the powerful drumming of Harry James (ironic how all the shows I've been to since Thunder in Manchester have contained the 5 members of Thunder between them!). Vocalist Chris Ousey doesn't appear totally comfortable engaging with the audience, but his singing vocals were spot on, both on the new material and the Whitesnake songs including the ever popular "Here I Go Again" and "Fool For Your Loving". Let's hope the bands touring schedule becomes less erratic than previously and they come around again soon.

Setlist
Guilty As Charged
A Little Rock & Roll
Ready an' Willing
Accident Prone
To The Rescue
Falling Leaves
Walking In The Shadow Of The Blues
Smoking Gun
Moody's Blues [Mick Moody & Harry James]
Slow An' Easy
Cover Me In You
Nothing To Lose
Here I Go Again
Take Me With You
+
My Angel
Fool for Your Loving
Posted by MatthewB2 at 1:46 pm No comments:

A chilly evening in Islington. After a couple of drinks at the Highbury and Islington end of Upper Street, we got to the Academy in plenty of time to see the support slot from Little Angel's frontman Toby Jepson. Playing a selection of solo and band material (all acoustic), he was in good voice although the crowd seemed slightly reluctant to get into full sing-a-long mode.

Then it was time for The Union. Having seen the rehearsal a couple of weeks ago this was a show I was looking forward to. I hadn't imagined it would only last 2 and a half songs! Unfortunately singer Peter Shoulder was suffering from a bad bout of flu and decided he couldn't continue. To be fair, the vocals hadn't sounded bad out front but the band rightly wanted to present their set in the best light. The show is due to be rearranged and hopefully Peter will recover soon.
We were trying to remember other shows I've been to which have been cut short midway through. I remember T'Pau going off twice in the late eighties - once when Carol Decker had nearly lost her voice (and they rescheduled) and once when I vaguely recall she'd fallen over at Hammersmith (I may be wrong on that!). Also Roger Daltrey went off at Wembley in 1989 with the Who, leaving the others to do the encore without him (which led to an excellent Townshend version of Won't Get Fooled Again with full guitar smashing). Gary Moore cancelled after the support had finished, but hadn't started his set. Oh and Little Steven was bottled off at Quo's Selhurst Park gig in 1984! So, unless my memory is going (it is!), this was the first one in the last 20 years of gig going for me.
We briefly met Toby Jepson on the way out and he was very welcoming and happy to have a photo taken with Richard which was nice.

Setlist
Step Up To The Plate
You're My Jesus
Tangled Up In You (half)
Posted by MatthewB2 at 11:59 pm No comments:

A very special show this one. Having signed up as a "pledger" to support the recording of the Union's new album, Rich and I paid to attend an informal rehearsal at Terminal Studios where the band run through the set for the forthcoming tour, have a few beers and chat with their fans. Sounds good? Well it was.

When we arrived, I was surprised by how small the studio was and the fact that there were only about 20 of us in the audience. The band had kindly provided drinks (Luke even popping out to Sainsbury's for more beer!) and were mingling before the action started, kindly waiting for a couple of latecomers. They then romped through the new set, with all of us guaranteed a first or second row spot, interspersed with a couple of stories or a bit of chat. If the band made a rare mistake, they went over it - just like a real rehearsal. When all was done, there was plenty of time for more chat and more beer. The band were happy for photos and autographs (we all got a setlist which was a nice touch) as well as answering all our "fan-type" questions. To say we were made welcome was an understatement. A great afternoon and thanks to Luke, Pete, Chris and Dave!