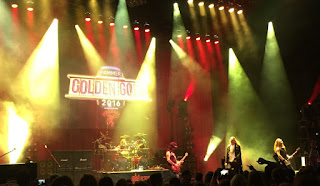 We booked up for this on the basis that:-

In the run up to the show - and having seen the other announcements - I was fearing the old adage that "you get what you pay for"! Wrong! What a fun evening!

First up were Amon Amarth. I had not seen "Norse Metal" before. And my, did it make you smile. Extras dressed as warriors beating their shields. Fire (dry ice) breathing giant dragons. And an 8 ft hammer. Wow!

Gojira were up next. Not my scene at all here, although they seemed popular amongst the younger audience members. Just a lot of noise and shouting for me - I must be getting old!

Next were Halestorm. Fronted by the talented Lzzy Hale, musically this was the best performance of the night for me. Great guitar and some catchy songs.

Final act of the night was "A Salute To Lemmy with Saxon, Phil Campbell and Mikkey Dee". Whilst I'm not a huge Motorhead fan - I had been due to see them before Lemmy's sad passing. This proved a nice, albeit brief, tribute.

Interspersing all of the above was the awards show. And so what if most of the awards went to modern metal bands I've never heard off and so what if our hair wasn't anywhere as long as 90% of the crowd. There was a moving tribute to the recent victims of a shooting in a gay US nightclub with the message that "metal is non-discriminatory". Here here.

So, against all the odds, a really fun evening.

Gojira
Silvera
Stranded
The Heaviest Matter of the Universe

Halestorm
Love Bites (So Do I)
Amen
I Miss the Misery 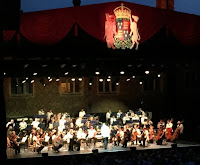 So AC/DC one week, The RPO the next, thanks to the generosity of some good friends. A very civilised couple of hours in a Hampton Court pub, followed by a picnic in a Gazebo watching others getting wet and then the concert.

Got to be honest and say it's not totally my thing and thought that the musical selections could have been aimed more at the casual classic music follower for an event like this. Still, excellently played and I did recognise one or two compositions. 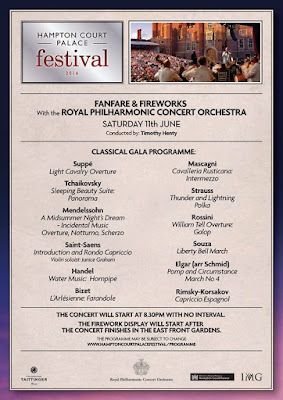 AC/DC are on their 2 date UK tour of taxpayer funded stadiums (London and Manchester) with guest vocalist Axl Rose standing in for Brian Johnson. And standing he was, forgoing the wheelchair from the opening nights of his guest spot.

Our seats, like most in the vast Olympic Stadium were miles from the action (I hope West Ham fans are long sighted!). However, they were comfortable and the volume was more than adequate to reach us and the essential big screens provided a view of what was happening - even with the inevitable time lag. For the first ever concert at the venue (after the Olympic closing ceremony), the sound was pretty good.

Mr Rose performed well - certainly the whole show was better than early YouTube footage I'd seen with him and the standing section of the crowd looked boisterous. I'm not sure if those who returned their tickets made a good call as this was a solid event and Angus Young seemed to revel in his "rock icon" status. The bottom line with AC/DC is you know what you are going to get and they did not disappoint.

Setlist
Rock or Bust
Shoot to Thrill
Hell Ain't a Bad Place to Be
Back in Black
Got Some Rock & Roll Thunder
Dirty Deeds Done Dirt Cheap
Rock 'n' Roll Damnation
Thunderstruck
High Voltage
Rock 'n' Roll Train
Hells Bells
Given the Dog a Bone
If You Want Blood (You've Got It)
Sin City
You Shook Me All Night Long
Shot Down in Flames
Have a Drink on Me
T.N.T.
Whole Lotta Rosie
Let There Be Rock (with Angus Young guitar solo)