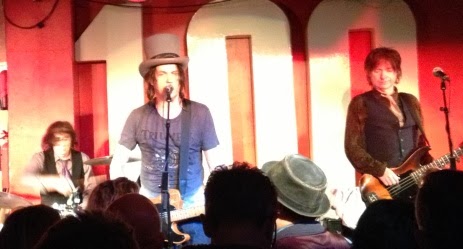 Now, how difficult can it be to find a venue on Oxford Street? Particularly one you've been to before and know where it is? And know it's number 100. "Very" would appear to be the answer as we walked past the narrow, unlit entrance 3 times!!!

Once in however, a full house was craning for a decent view of the side-on stage. Not easy with 2 massive pillars in front, but we found a central point with a half decent view. The show was good (it always is with this band) and the songs from the new CD ("Circus Life") went down well. Will look to purchase the standard version of the CD tomorrow and get it signed. 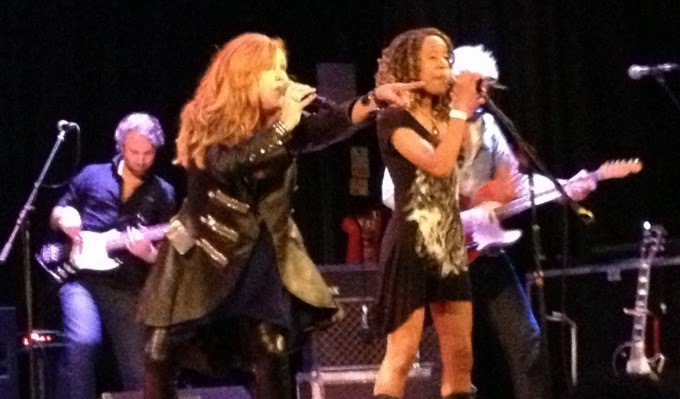 The first central London T'Pau show for many years. We'd even managed to coax some friends along to this based on the Burgess Hill show earlier in the year. A quick check on stage times before going for a beer revealed 3 support bands. This started alarm bells ringing - they are bound to overrun and there is a strict 11pm curfew. No matter, T'Pau will be on at 9:15 we are told.

Post beer, we return for 9:00pm. They are running late - what a surprise!  A band called Blue Zoo who seemed to think they were famous in the 80's (no, me neither!) dragged on for a while meaning Carol and the boys didn't appear until 9:50. This led to a rushed set - no doubt missing out a few songs - with no break for an encore or between song chat. The extra support acts are a false economy - no-one wants to see them, so there's no better value for money and it just delays and detracts from the main act.

Still, the brief(er) T'Pau set was excellent - vocals top notch (not really any need for the young backing vocalist who had been drafted in) and a few setlist changes from earlier in the tour. Shamefully, I'm not fully up to speed on all the tracks from Rage or The Promise, so there were a couple I only vaguely recognised. I was slight disappointed not to hear 'Time Will Tell', but other than that all was good. A live CD of the performance is promised - I will be making a purchase!

If anyone knows the definitive setlist then please let me know.

Monday night? Really? Oh, OK then. Decent tickets acquired during pre-sale, it looked optimistic for MTH to do the O2. Still, at least the venue can be divided to the lower tiers only without looking too empty.
Huge plus point was the addition of Thunder as special guests.

Fish was up first to a sparsely populated arena. He is a bit larger then when I last saw him! A solid performance - but when it's not your crowd it must be tough.

Thunder enjoyed a bit more success - although not in the technical department. Guitarist Ben Matthew's must have missed half the set with difficulties - much fiddling from the roadies with leads and amp connections - not good. On the other side, Luke Morley's acoustic guitar (in it's usual position attached to a pole) had to be supported by another roadie to stop it collapsing. Still a solid set even got the crowd interacting and hopefully the boys won a few new fans. Danny's cry at the end of "we'll see you soon" was a bit optimistic if you are not flying to Japan or going to Wolverhampton for their Christmas shows!

In the intermission I grabbed a quick chat with the Sweet's Andy Scott - we're seeing him next month, so I was able to tell him we're looking forward to it.

Mott The Hoople came on to huge applause. For a band where some members are in their 70's, they were fairly sprightly - Ian Hunter especially who was on his feet for the first hour or so. They had a few technical issues too with mics. The early part of the set was aimed at hardcore Mott fans, meaning there were a fair few songs I didn't know. The latter half was the hits and the crowd lifted during those. The bookies would have given you very poor odds on Joe Elliott turning up (he did) - and he took over on All The Young Dudes. Not sure of the last time I heard that without him !! A substantial number of band-related family members helped out on backing vocals for the encore.

Saturday Gigs bought the evening to a close and it's hard to believe that this won't be the last time we see the band, so all in all a decent send off. I think it was being filmed for DVD - hopefully the lighting will look better on that than it appeared for real!

More Union - that's quite a bit in the last 12 months I guess! It may also account for the relative emptiness of the venue - probably only 2/3 full. Still, you know what you are going to get and we got it. Good show, great vocals and guitar. Maybe the setlist needs a bit of a shake up next time around though (and I wouldn't finish with "Lillies" in the encore if it were down to me).

Pleased to pick up the signed "Official Bootleg" CD on the way out. And I also added to my drumstick collection with another signed item. Nice! 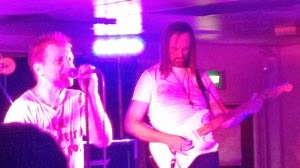 A low key gig at the Boom Boom. Variously billed as "the Total Who Show" and "Magic Bus" it did what it said on the tin. 100 minutes of brilliant Who material.
I can only say that Mr Warman's address book must contain an endless array of fantastic musicians. I really enjoyed the guitarist here, but for me the keyboard player was brilliant. Johnny gave his normal 100% and the smiles on the audiences' faces said it all.

We'll shout for "Bell Boy" next time!
Posted by MatthewB2 at 2:21 pm No comments: 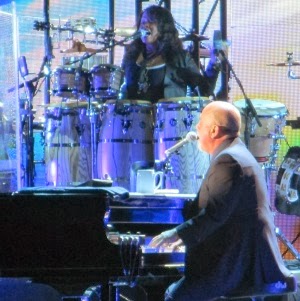 Superstar Billy Joel returns to London, playing his smallest UK venue I'd guess since the 1970's. And not just any venue - London's best.

After a scrum for tickets whilst we'd been on holiday (thanks Dave!), we had decent seats in the stalls. Glad we remembered photo ID as it was needed for entry. Fyfe Dangerfield provided support (and another addition to my "chart acts" seen). He was fine and his version of Mr Joel's "She's Always A Woman To Me" from the John Lewis ad proved popular as expected.

Billy himself has clearly aged a bit since we last saw him. Now 64 (as he reminded us with a snippet of the Beatles classic), there was less jumping and running around, but still excellent showmanship and piano playing. Vocals were solid and of course the songs brilliant.

I was shouted down by friends who were there who didn't think "Zanzibar" was a weak point though. That song aside, I really enjoyed it all - being picky for £90 it would have been nice to have another 3 or 4 songs, but ho hum. I even purchased a poster on the way out - must be 20 years since I last did that at a gig!

Setlist
My Life
Movin' Out (Anthony's Song)
Everybody Loves You Now
Where's the Orchestra?
Allentown
When I'm Sixty-Four
Pressure
New York State of Mind
She's Right on Time
Vienna
Zanzibar
She's Always a Woman
Don't Ask Me Why
Uptown Girl
Blonde Over Blue
Scenes From An Italian Restaurant
The River of Dreams [with Rule Britannia]
Piano Man
+
We Didn't Start the Fire
It's Still Rock and Roll to Me
You May Be Right
Only the Good Die Young
Posted by MatthewB2 at 2:21 pm No comments: