One Liner: Amazingly hot gig in a small venue for the classic rockers. One -off show to celebrate their new Greatest Hits album. Did I mention how hot it was?

One Liner: An all too short acoustic set at the legendary South London venue. 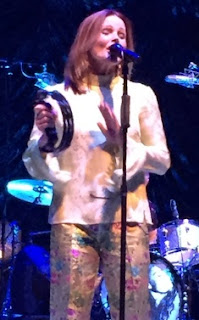 One Liner: Belinda's first night of the tour celebrating 30 years since the release of her "Runaway Horses" album. Beautifully performed with excellent vocals and setlist choice. Glad to have decent 3rd row seats for this one.

One Liner: A scarcely believable 17,000 people turned up to the Food and Drink Festival in Cheam Park. Many would have seen or heard Johnny Warman as the headline music act. We were towards the back, but Johnny sounded in good form ripping through the best of his 60's and 70's revue. Even finishing (surprisingly) with Hi Ho Silver Lining.

One Liner: Spike's All Star band celebrate their 25th Anniversary. I'm a big fan of the concept, but have to say the guests and the songs they sing are becoming a little familiar.  After a very slow start, things got more energised when Toyah appeared and "surprise" guest Roger Taylor sang some unexpected tunes, but somehow this wasn't as fun as it should have been.