The last show of 2010 for me. Feeling a little bit under the weather after the previous days' pub crawl - so it was quite useful that I wasn't meeting Richard until later on Saturday evening. We went into the venue early to catch "The Dan Reed Network" who were OK, but I think Dan himself seemed to be enjoying their performance more than most of the audience! I'm certainly not tempted to pay money to see them at their own show. Whilst waiting between the acts I remembered that I'd seen the Quireboys here (when it was known as the "Town And Country Club") around 1990 - scary!

The venue was only half full, giving easy access to an excellent view a few rows back in our normal "front-left" position. Last time we saw the Quireboys they were doing an acoustic set and I was pleased to be able to grab a copy of the limted edition of 1000 signed double CDs from that mini-tour. Tonight was plugged in and, as normal, was a belter of a show. Starting with ""Hoochie Coochie Man" / "Mayfair", the band rocked through nearly all of their favourites in a 2 hr set. The 11:20 finish meant a late return home, but the show was well worth that. Perhaps not suprisingly I felt a lot better by the end than I had at the start. A great gig to finish the year!

The snow and ice meant a late cancellation of what I had planned for Saturday, so I took the opportunity to pop down to Putney for the Mods, who were billed as performing The Who's Quadrophenia. Unfortunately, due to the drummer (Johnny Marter?) being indisposed, the short notice replacement didn't know all the material, so that didn't happen. 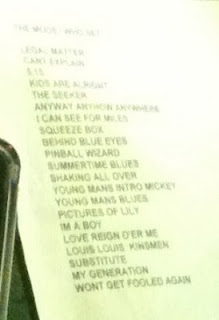 No matter - he knew a sufficient selection of other Who material to more than make up for that. Starting with A Legal Matter and moving through all sorts - Pictures of Lily, 5:15, The Kids Are Alright, Can't Explain, Substitute,  The Seeker, I'm A Boy, Summertime Blues and many more - the band were on excellent form. An interesting version of Young Man Blues segued the Jazzy style of Mose Alison's original with the Who's powerhouse version. I particularly enjoyed Pinball Wizard with the guitar intro played at the start and the "Elton John" piano solo played midway through by the excellent Mickey Simmonds.

There were a couple of non-Who tracks - Argent's Hold Your Head Up and Led Zeps Kashmir plus the Kingsmen's Louie Louie (from Quadrophenia) as an encore. Surprised it wasn't busier - blame the weather I guess, but a good night in the company of fantastic musicians.
Posted by MatthewB2 at 11:44 am No comments: