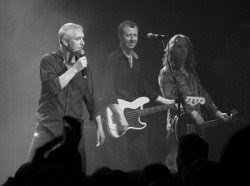 One of the last shows at the Astoria which is to be demolished soon as part of the "Crossrail" project. Whilst it is a shame to lose an iconic venue, hopefully they will build a replacement with better facilities!

Thunder were promoting their excellent new album, "Bang!". Setlist was a mix of old and new and the band were on top form in front of a packed audience. Only downside was that the tube shut 30 minutes earlier than advertised (no explanation) and we then had a 40 minute gap before the night buses started to get us home... very...very late !

Set list:
Backstreet Symphony
On The Radio
Carol Ann
Low Life In High Places
The Devil Made Me Do It
Empty City
Dirty Dream
Love Walked In
Stormwater
Can't Keep A Good Man Down
Don't Wait For Me
I Love You More Than Rock 'n' Roll
+
Gimme Some Lovin'
Higher Ground
Dirty Love

So, Simple Minds and Deacon Blue. Admitedly, not my normal sort of show (although I do quite like Deacon Blue) - but this was a "freebie" by way of Wembley's apology for the Oasis fiasco a month or 2 back. Mrs B is a Simple Minds fan and there weren't too many other enticing shows at Wembley (everyone seems to do the O2 instead now!), so this looked worth a go.

After the normal traffic chaos and nearly 2 hours to travel the 18 or so miles to Wembley, we settled into our "guest" seats about half way back on the shelf. Deacon Blue delivered a Greatest Hits set, including "My Town", "Chocolate Girl", "Wages Day", "Real Gone Kid", "Fergus Sings The Blues" and "Dignity", so you couldn't go far wrong apart from the poor sound quality for the first 2 songs.

Simple Minds also treated us to the "Hits" which suited me. The one thing that struck was that the vocals of Ricky Ross and Jim Kerr were pretty spot on, considering they are singling songs which were recorded 20-25 years ago. A pleasant evening and a much faster journey home. 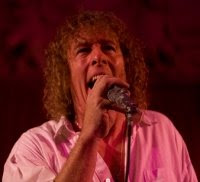 Thanks to Barry from The Wholigans for mentioning this show on this very blog, otherwise I would not have known about it.

Started the evening in The Stewart Arms - a real "Life On Mars" throwback of a pub. There was actually a guy in there who we didn't know if he was asleep, in a coma or dead - just slumped over 2/3 of a pint. After 20 or so minutes he moved and slumped onto the other side of the table, so encouraging signs of life! Everyone else just carried on around him, so assume this was a normal state of affairs.

Then went to a nice bar called "The Prince of Wales" which had a fine selection of beers. Very expensive, but a good effort. Meandering back towards Bush Hall we stopped in an Irish Pub. The Irish clientele were watching the England game and the back of the pub was full of Poles watching Poland beating Ireland! Classic!

We decided to skip the support band - "The Small Fakers" to see a bit more of the football, having handed over our entrance money to the security guy on the door. Maybe not the smartest thing to have done - half expected him to deny all knowledge of us when we ent back or to have done a runner, but it was all fine and in we went.

With hindsight, I'm sure the Florida-based band wouldn't have chosen to play the night of an England football match, because the place was nearly empty! No more than 75 punters which was a real shame, becuase the band are excellent. Once again, vocals were spot on and the band sounded just as they should. It was loud too! Good setlist - even a few for the "hardcore" - "Fortune Teller" anyone? I'm sure everyone there had a good time - let's hope there are a few more next time around.

OK - cards on the table time. Firstly, I am a big fan of Bryan Adams and have seen him over 50 times in the last 21 years. Secondly, I think his "new" album, "11" is the weakest one he has ever done, so wasn't quite sure how this was going to turn out.
Having broken my o2 "duck" a few weeks ago for Queen, it was back to the mega-arena for some classic Canadian Rock. We took an alternative route via Maze Hill, giving us the opportunity for some new pubs on the way with a half in each. The first was called the "The Vanbrugh" - a pleasant enough local which was obviously trying to enter the "gastro-pub" arena. Pretty quiet there, so it was onto the (very dark) Crown (bypassing the totally empty "Ricks Bar"). Then onto the slightly eccentric "Royal Standard" where we played some reasonable quality darts - well reasonable when you consider the darts we borrowed weren't actually made up from one set. Then onto the "Ship and Billet" - I'll be polite and just say it was typical of the area! Finally the bus then dropped us near the "Pilot Inn" which again offered the bonus of attractive bar staff.
OK, enough waffle... the gig: We knew from reading about the other UK shows that Bryan was likely to start on the 'B' stage in the middle of the arena, so we stood near that. When he came on, he was only a couple of yards away, so we got an excellent view of the first 2 acoustic songs. We then beat the rush, to get nearer the main stage - ending up about 25 yds away... not bad considering the venue was packed. What we got was 2hrs 20mins of classic Adams, old and new. It was Bryan's birthday and he really seemed to enjoy himself. Highlights for me were "Hearts On Fire", "Summer of '69", "Take Me Back" and an unexpected "When The Night Comes". We even got a suprise guest when Mel C (Spice Girl) turned up for "When You're Gone". All in all an excellent show, and as I said to Richard as we filed out - "We may just have seen the gig of the year".
Setlist:
Can’t Stop This Thing We Started (Acoustic)
Please Forgive Me (Acoustic)
The Best Of Me
Somebody
Hearts On Fire
18 Til I Die
Let's Make A Night To Remember
Back To You
I Ain't Losin' The Fight
Summer Of '69
Everything I Do
Cuts Like A Knife
When You're Gone (with Mel C)
Thought I'd Died And Gone To Heaven
She's Only Happy When She's Dancin'
Heaven
It's Only Love
Take Me Back
Have You Ever Really Loved A Woman ?
The Only Thing That Looks Good On Me Is You
I Thought I'd Seen Everything
Run To You
Cloud #9
C'mon Everybody
Straight From The Heart (Acoustic)
When The Night Comes (Acoustic)
Walk On By (Acoustic)
All For Love (Acoustic)
Posted by MatthewB2 at 7:45 am No comments: