So what to make of Snakecharmer? Having started off as a Whitesnake inspired tribute and moved to create an excellent debut album of their own, they seem to have lost their way slightly. Micky Moody has left and whilst those excellent musicians who are left can perform impeccably, the spark seems to have gone somewhat.

That was summed up by the fact that up until the day of the show, I wasn't 100% sure about making the trek up to the ULU - not really London's greatest venue with it's overpriced bottle-only bar, limited toilet facilities and no-balcony access policy.

I decided to go. Sadly, very few others made the same choice and I was stunned at how sparse the venue was - everyone could have popped back to mine afterwards! And that was a shame - and all credit to the band that they still performed a decent set.

There was competition for the audience from Robert Plant / Van Morrison across town, but surely not such an overlapping fan base for that to be the reason for such lack of interest. So, there must be some serious questions to be asked. How do a band as talented as this get themselves back on track? 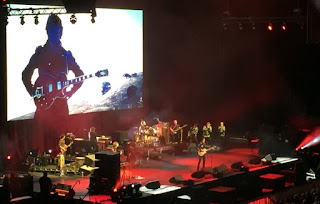 A nice double header at the O2. Original seat prices had been well over £100 (outrageous), but we sensibly bided our time and waited for the inevitable 2-1 offer which duly arrived a couple of weeks before showtime with half-decent seats at the side.

I've never seen Steve Miller before, but like enough of his hits to know that I should enjoy his set and indeed I did.

It will come as no surprise to seasoned blog observers that Mr Fogerty is a favourite and looking at the CCR-heavy setlist, you'll see that he delivered just what the doctor ordered. The only criticism is that it all felt a little rushed and the addition of Tyler Fogerty on vocals for 2 numbers did little to add to the occasion. Another son was in the band on guitar.

But all in all, for half price, a very good evening.

Setlist (John Fogerty)
Travelin' Band
Green River
Hey Tonight
Up Around the Bend
Who'll Stop the Rain
Lookin' Out My Back Door
Rock and Roll Girls
Good Golly Miss Molly (with Tyler Fogerty)
Psycho (with Tyler Fogerty)
Long as I Can See the Light
Mystic Highway
Born on the Bayou
My Toot Toot
Jambalaya (On the Bayou)
New Orleans / "When the Saints Go Marching In"
Have You Ever Seen the Rain?
Rockin' All Over the World
Down on the Corner
The Old Man Down the Road
Keep On Chooglin'
Fortunate Son
Bad Moon Rising
Proud Mary

Normally when we see Warner it's as part of the excellent Homemade Sin band with Dan Baird, so it was a treat to see him solo at the local Boom Boom Club.

Warner's passion for music (and especially AC/DC) shone through and he was engaging throughout. The music was great too, wth some solo stuff, tunes from his "other band" - Jason and the Scorchers and a smattering of covers including AC/DC, Beatles, John Denver & CCR.

An short-ish evening with Roger Daltrey at the South Bank where he is talking about his Autobiography (out today) called "Thanks A Lot Mr Kibblewhite".

As you can see from the blurred picture, we were miles back in the affordable seats, but as we were lucky enough to have front row last time we saw him perform, this wasn't really an issue for an event of this format.

Some interesting stories, a brief Q&A but unfortunately no music - which was not really a surprise. The bonus was that our copies of the book (included in the ticket price) were signed. A nice touch. 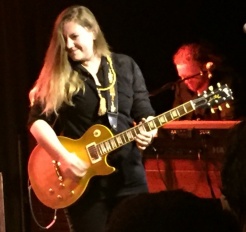 Having originally left the ticket purchase too long (and seeing the show sell out) it was with some relief that a few extra tickets became available two days before the show. Joanne is still touring her excellent "Wild" album and this intimate performance in a really nice venue was top notch.

One of the benefits of London shows is that you often get a bonus song or 2 compared to the rest of the tour and this was true here.

I can't help but think that sooner or later Joanne is going to make that leap from "star" to "superstar" status. Maybe just needs an appropriate big name support slot for people to sit up and take notice. In the meantime, I'm happy to admire her fantastic musicianship from close quarters and look forward to the new album in 2019.

Setlist
Dyin' To Know
Nothing To Lose
No Reason To Stay
Jump That Train
Tried, Tested & True
Diamonds In The Dirt
Time Has Come
Bones
Just Another Word
Wanna Be My Lover
In The Mood
Going Home
+
Mudhoney