So, probably my last Who show of the year (4 in a couple of months isn't bad going). An unpleasantly busy Hyde Park and a massive Golden Circle area (£100 + a ticket) meant that even being only 7-8 yards back from the main barrier, we were still at least 130 yards from the stage. Even being near a speaker this meant with Hyde Park's ridiculous noise restrictions the audience could chat or sing easily over the volume of the band - and we are talking The Who here - not some acoustic folk outfit.

It really is not a great environment to see anyone. Earlier, I'd caught the end of the Kaiser Chiefs from about half a mile away - I think they were predicting a riot of some sort, but it was too quiet to be sure. Paul Weller was good, but the reaction to the Jam material (2 songs only) must tell him he needs to include more in a festival set.

The Who, from what we could hear, were good, if not at their devastating best. The fear is that this could be their last ever London show, so it was at least captured for a DVD. The view from the stage must be great, but surely London can find a more appropriate outdoor summertime venue.

Final note on the state of some people leaving the venue. Many were passed out or literally being carried / dragged by friends or family due to over indulgence. Really - what is the point? You can imagine their conversation:-
Q: What did you get up to at the weekend?
A: I went to see the Who - cost me £75 and the same again on beer.
Q: What was it like?
A: No idea.

I call that a Bargain...

Setlist
I Can't Explain
The Seeker
Who Are You
The Kids Are Alright
Pictures of Lily
I Can See For Miles
My Generation
Behind Blue Eyes
Bargain
Join Together
You Better You Bet
I'm One
Love, Reign O'er Me
Eminence Front
Amazing Journey
Sparks
Pinball Wizard
See Me, Feel Me
Baba O'Riley
Won't Get Fooled Again

A rare jaunt these days to Wembley - or the SSE Arena as it appears to be branding itself. Whatever they call it, they need to sort out their catering - 20 minute queues to get a beer is not on. Competent staff and a bit of pre-pouring isn't difficult surely!

We were here primarily for Thunder. Having grabbed a decent spot near the front, they entertained with a decent (but short) set of classic hits and new material. All seemed to be well received.

Having moved a bit further back for the headliners, the first 3 or 4 songs were good. Then I thought we hit a bit of a lull. I've seen ZZ Top 4 times previously over the last 25 years and it's always been hit and miss for me - sometimes great, but sometimes a little self indulgent and the songs merge together. Thankfully this time around, the lull was brief and from "My Head's in Mississippi" onwards the show was fantastic. Jeff Beck joined for the encore on his birthday - looking much more youthful than his 71 years and was rightly given an ovation (and some cake!). 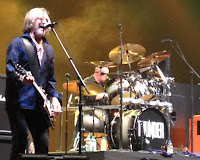 Spike from the Quireboys is a big fan of Frankie Miller and 70's legends Free. This show was designed to showcase the material of both the Scottish Rocker and Free. Andy Fraser - Free's bass player was due to be in the band, but his untimely passing a few months ago turned this into a fitting tribute to his music as well.

Spike had assembled a first class band - featuring members from many of my favourites - Luke Morley (Thunder), Mark Stanway (Magnum), Simon Kirke (Free) and Nick Malling (Quireboys). Spike was full of his normal summer spirit and entertained the crowd between songs with a few comments. The music was King here though and an entertaining set was of the highest quality. It would have been great to have been a little longer, but I guess if the aim was to send the crowd home wanting more then it was mission accomplished.

There did seem to be a few people under the influence (indeed there was an unpleasant smell of vomit in the venue) and a few female audience members barely able to stand. Shame they won't remember much of this. Finally, 1 point scored for a Ling-alert!