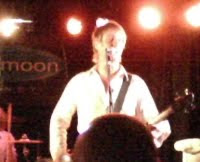 Rhino from Status Quo (and most of his family) playing at the popular Half Moon venue in Putney.

The location allowed for a bit of a crawl beforehand and we got to the venue around 9:00 to see Rhino still in the bar. This gave us time for a win on the Quiz machine and a game of Pool where - despite the amount of beer consumed - I was uncharacteristically brilliant.

The show was good (although it was a shame the late start meant a shorter set) and was the normal mix of Solo stuff, Quo Material (mainly lesser played album tracks and 'b' sides) and a smattering of Rock covers. Pretty much every member of Rhino's family seemed to be in attendance and most performed! All in all, good fun. Didn't hang around to chat afterwards - instead went for a bit more listening to some classic rock in the B@1 bar.
Posted by MatthewB2 at 12:35 pm No comments:

Ambiguously billed as "Jeff Beck with the Imelda May Band", it was unclear if Imelda May and her band were supporting (as they had done on the last tour) or Jeff was joining her band for the evening. A call to the O2 on the day of the show confirmed the latter - no support and Mr Beck in the Band. Knowing that this would mean a night of Rockabilly as opposed to Jeff's normal material, in the bar beforehand Dave was making all sorts of threats to "sue Harvey Goldsmith for misrepresentation" etc.

As it turned out, there was no need to worry. The band were solid, Imelda May's vocals quite stunning and the whole evening was full of enough classic tunes, whatever style they were played in and we all enjoyed it. Ronnie Wood and Jimmy Page were in attendance, but unfortunately had declined the offer to perform - taking a bit of stick from Jeff as a result. Few performers seem so uncomfortable speaking to their audience, but who cares when the guitar playing is so good.

Found out later that Jeff Beck and Eric Clapton are playing the O2 next year. Price £125. Errr... no thanks Harvey. It's good, but not that good.