My annual look back over the year from a "best of" and "worst of" perspective.

Most Disappointing Gig 2008
1: The Scorpions - Hammersmith Apollo
Last years "Best Gig" winners was the most disappointing this year - but still not bad!
2: Status Quo - Brighton
A rare below-par performance from the Quo - but still an enjoyable show.

I can't really describe any of the others as disappointing - In a year of reduced shows for me, the quality has been really good. That's probably down to me being very selective!

Good in 2008
1: Less Drunks at gigs than last year.
2: Venues don't seem to be quite such a squeeze when "full". Maybe Health & Safety has reduced some capacities.
3: More friendly security - Seems more customer focused at most venues.

Bad In 2008
1: Even more people buying tickets for "big artists" purely to flog them on eBay for profit. Lowlifes! And don't even get me started about Seatwave / GetMeIn / Viagogo etc! How does AC/DC sell out 2 nights at the O2 in less than 10 minutes? Why are prime seats available via GetMeIn (A Ticketmaster Company) etc a nanosecond later at a 400% markup?

2: Fuelled by above, Rip-off ticket prices still. Maybe the credit crunch will bring these back down. Even if it does you can bet the agencies will still charge a fortune in "booking fees" and postage.

3: Merchandise costs are still far too high. I still don't want to pay £15 for a programme. As said before, I would buy a T shirt if they were a) good and b) around a tenner instead of poor quality and £16/£20 each ! The "fake" ones outside are less than a fiver and often not any worse quality.

The Who - Monday 15th December - Indigo2 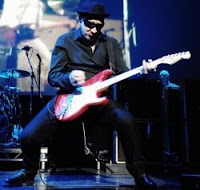 What can I say - It's the WHO! Therefore as you would expect it was very, very good! Included the first public performance for 25 years of "Slip Kid". Lots on banter and swearing from Townshend and Daltrey in fine voice. Also the novelty of the 1st song performed twice has PT had a problem with his ears and had to leave the stage for 5 minutes. I blame the hat and glasses!

Rock and Roll at its best! Greatest Hits and a selection from the excellent new "Homewreckers and Heartbreakers" album.

Kentish Town has smartened up a bit too.. it even has a nice Piano Bar called "Annies"!
Posted by MatthewB2 at 1:31 pm No comments:

The 2nd of 2 Quo shows at the end of the year and Brighton presented an opportunity to take a day off work and have a leisurely wander around some bars and record shops.

It was just as well we weren't thirsty while we were in the Brighton Centre as they were enforcing a bizarre rule whereby drinks could be taken into the auditorium before the lights went down, but not during the show (despite the fact the bars were open and serving!).

Anyway, we had a good view from Row E, but personally I felt the band weren't quite on top form tonight. Last years Brighton Show was one of the best I've seen, but this one appeared a little rusty. Still, good to hear the "new" old songs in the set and Richard and I have decided to go for the rescheduled Portsmouth show in February.

Setlist:
Caroline
The Wanderer
Rain
Don''t Drive My Car
Mean Girl
Softer Ride
Beginning Of The End
Is There A Better Way
Proposin' Medley
Pictures Of Matchstich Men
Ice In The Sun
The Oriental
Creeping Up On You
In My Chair
Living On An Island
In The Army Now
Drum Solo
Roll Over Lay Down
Down Down
Whatever You Want
Rockin' All Over The World
+
Juniors Wailing
Rock 'N' Roll Music / Bye Bye Johnny
Posted by MatthewB2 at 1:31 pm No comments: