So, 2014 comes to an end with an enjoyable evening with Jim Cregan and his excellent band. A packed Boom Boom club the day before New Year's Eve witnessed 2 hours of mainly Road Stewart material (with Ben Mills on vocals) as well as a couple of other snippets from Jim's career with Family and Steve Harley & Cockney Rebel.

As is often the case there were some amusing anecdotes from Jim and it's nice that he still plays the actual guitars that many of these classic songs were recorded on. Go and see them during 2015 if you can.

2014 has personally been a good year for gigs, this one being my 38th of the year (probably highest total for 10 years or so) and there have been very few (if any) duds amongst them. Highlights included the classic Quo lineup "final ever" shows at Hammersmith, Ian Hunter at Brighton and the Bryan Adams London shows.

Here's wishing all readers a very happy and prosperous 2015. 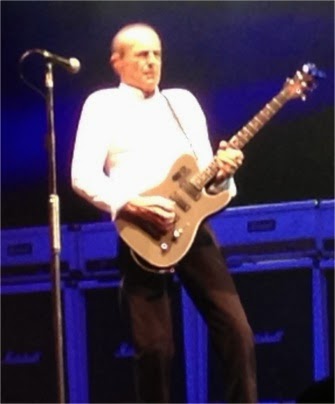 The next blog entry should have been "The Who" last Wednesday, but that is postponed until March next year due to Roger Daltrey's throat condition.

So, instead it a "traditional" trip to Brighton for a bit of Quo. The afternoon was spend on a darts session (luckily of high enough standard to impress a group of lads on the "shared-space" pool table).

The evening was at the sold-out Brighton Centre for the last night of the 2014 tour. The evening started with a mixed set from Chas 'n' Dave. They bravely did some new material as well as many of their old favourites. All good fun, but for me they are at their best in a smaller venue with a lively crowd joining in. The arena setting just didn't feel right.

Quo came on around 8:45 and very good they were too, despite the fairly predictable setlist (I'm not going to bother moaning about the lack of change or "Blue Eyed Lady" being dropped from the start of the tour) and more surprisingly a new guitar for Francis Rossi. Turns out his classic green Telecaster has nearly given up the ghost and can barely be played due to it's condition. I'm not quite sure why he hasn't purchased / been given one that looks the same as he is so identified with it - surely Fender would make one for him!

Still, the new guitar sounded fine and the band were all on good form. Rick sounded better vocally than recently and after his latest health scares is hopefully off the fags and booze and fighting fit. Even the normally dodgy "Burning Bridges" sounded OK here with Rossi playing the lick alongside the keyboards.

Despite what the detractors may say, "current Quo" still pack a punch and give the audience what they want (missed the obvious "Whatever You Want" reference there!).

A four band bill, a Sunday night and early finish on the tube. H'mmm - Monday booked off work as contingency. Apparently, not many others took that option and chose to stay away as Dingwalls was sparsely populated in the extreme. It being a Sunday night aside, I do not know why as, for once, all the bands looked to provide something to the bill if this is the style of music you like.

We caught the end of the openers and they sounded more than competent. The Western Sizzlers were next - this is the first time we'd seen Rick Richards outside of the Georgia Satellites and they produced a solid set based around their new album "For Ol' Times Sake..." (purchased on the night) which includes a nice cover of Quo's "Break The Rules" and a very Quo-esq "One More Beer" (think "Wild Side of Life"). As I found out later via a brief chat, singer and songwriter Kevin is a massive Quo fan (I jokingly pointed out that his 100+ times of seeing them was "lightweight", but I think he won the argument by saying that the vast majority of those were "proper Quo" with the pre '85 lineup!).

Warner E. Hodges was up next. Keen readers may work out that I'd seen him twice recently already via his involvement in Dan Baird & Homemade Sin, but I'd never seen him on his own before. I didn't know most of the songs, but he was really good as expected. A very heavy impromptu encore of "Country Roads" bought about a bit of a sing-a-long - excellent stuff. He was as gracious as always afterwards posing for photos and a chat.

Top of the Bill was Mick Ralphs with his Blues Band. They have changed their vocalist since we saw them last. I've no idea why, but there was something about the previous singer I didn't quite take to. Only a perception - but he gave off the impression he thought we were lucky to be able to hear him sing (he was good, but...!). As I say, only a perception from distance, he may well be a top bloke.

The new guy seemed much more personable, but as a result the material played was a bit different. To be fair, I didn't know much of it. Predictably "Can't Get Enough" was thrown in (can't really argue with that to be honest) and Mick's guitar playing was really good and the rest of the band too. Mick also was happy to have photo's afterwards - a true gent.

All in all, a long day (we'd had a long darts session in the afternoon), but a good one.

At last years SAS Band Christmas show, Spike had hinted at a 20th anniversary tour  featuring "as many guests that have worked with us over the years that we can get". Possibly due to the 2014 Queen tour, that had been scaled back to a warm-up in Southampton and this show back at Guildford.

So it was with that expectation that we'd probably see loads of names with a high percentage chance of the remaining Queen members turning up for some pre-holiday fun.

Things started off with band stalwart Chris Thompson being joined by original bassist Neil Murray and the regulars Johnny Marter. Jamie Moses and, of course, Spike Edney. Other regulars followed - Mick Wilson (10cc), Patti Russo, Madeline Bell and Paul Young. The Fabba Girls did their standard bit in the middle too and there was the always fun "29 Riffs".

The 2 highlights for me where the 2 artists I'd not seen with the SAS Band before - Tom Robinson and Mel C. Tom included (in his words) "A medley of my greatest hit" - the classic "2 4 6 8 Motorway" and an entertaining story and sing-a-long- "Glad To be Gay". Mel C showed that she is the Spice Girl who can sing and her version of "River Deep, Mountain High" especially was excellent.

Errr.. and that was it, guest-wise. Which, unfortunately left it feeling a bit of a downer. Don't get me wrong, the band always deliver a solid (and fun) performance - and you should go if you've never seen them, but this was an expensive ticket and billed as a special anniversary rather than a regular show. Maybe we've just been spoiled before. 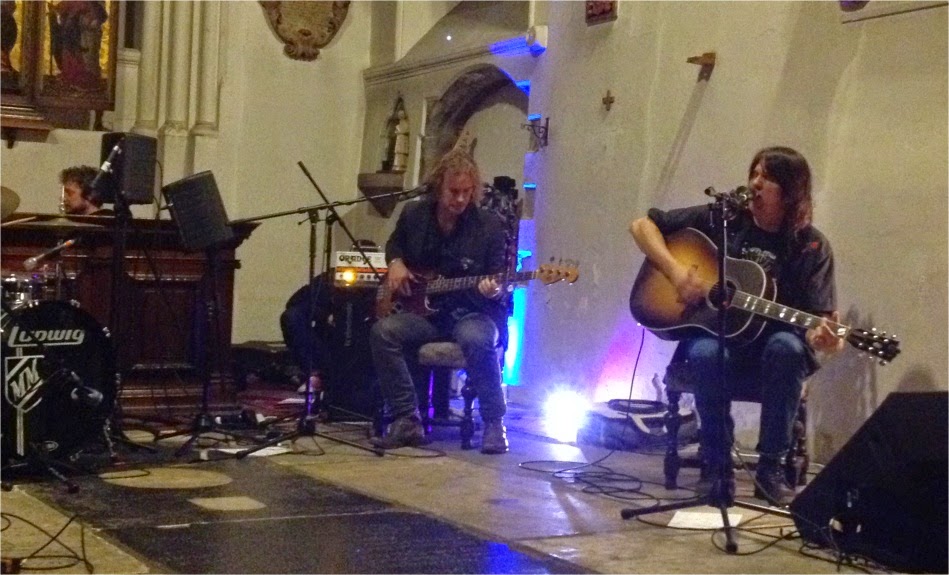 So, this is the year of the acoustic shows. I've seen Bryan Adams and Status Quo recently "unplugged", but there's probably none more surprising to see in this format than Dan Baird & Homemade Sin, playing their first ever acoustic concert.

The setting is the St Pancras Old Church - a real operating church with a seated capacity of 110!

We got there early before the doors opened and were able to grab a front row seat on surprisingly low church chairs. The evening was to be split into 2 sets (to allow an interval to use the outside portaloos!) and gather drinks from the "refreshment table".

The sound was good, although maybe the drums had a bit of an echo - it must be a nightmare being the sound guy somewhere like this. The material was obviously carefully chosen to match the instrumentation (guitars borrowed from Ian Hunter apparently), although there were a number where Warner E. Hodges swapped to an electric telecaster. His playing was exemplary as normal, as was the rest of the band, although they all fell about on the odd occasion there was a mistake. You got a true sense of the band enjoying playing together.

The second half got off to an emotional start as Dan had just received word that Faces musician and friend Ian McLagan had died in the US, one day after another friend, Bobby Keys. A solo version of "Another Chance" was a fitting tribute.

The rest of the set was really enjoyable. If you were ultra-picky, you could say that a couple of songs were a bit too long and others could have been added if they'd been shorter, but I didn't see any faces who didn't seem to have really enjoyed the evening. Dan and Warner were kind enough to sign CDs and setlists at the end too. Top guys one and all. 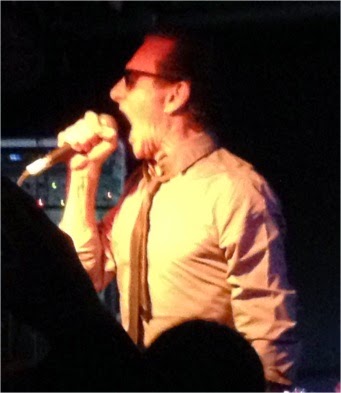 A return trip for me to Graham Bonnet and a new venue! The O2 Academy TWO! I'd only been in "one" previously.

So, I'm going to start with a moan. It's a Monday night. Why have 2 support acts on? Why have the headliner not come on until 10pm? Why only play for an hour? If you are playing for an hour, why include a cover and a ****ing drum solo? Why have to cut songs out of your set to accommodate the above?

Rant over. I'm probably just upset I didn't get to hear "Night Games". What we heard was good. We even got a 2nd Rainbow singer as Doogie White guested on "Since You Been Gone". It just could and should have been so much better (and longer).