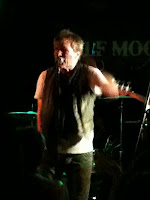 A trip to Putney for one of our regular bands - the Mods. A good selection of the normal covers with emphasis tonight on The Who which was good. Singer Johnny Warman promised a full version of Quadrophenia on the next visit - that will be worth a listen!
Posted by MatthewB2 at 3:54 pm No comments:

Yes, yes - Cher. Not my normal thing of course, but this is Vegas! In the cheap seats (a "bargain" $90 plus the obligitory US "convenience charge), Cher's multi-million pound extravanganza wasn't quite what I'd expected. Rather than purely a concert, this was a collection of mini-plays / muscials acted out to Cher singing backed by a live band who played mainly in the wings.

There were a few surprises - she opened with U2's "I Still Haven't Found What I'm Looking For" and included Bob Seger's "Old Time Rock and Roll" (last heard a few weeks ago by Mr Rossi!). What was no surprise was the costume change after every song. Unfortunately this led to much too much video footage which did detract somewhat from the actual show. In all, she probably only actually sang on less than a dozen songs. All in all a 7/10 for me.
Posted by MatthewB2 at 11:07 am No comments:

Randy Bachman and Frank Turner together in London for the first time in about 34 years. So, why was the Relentless Garage (stupid name!) so empty? Seriously, there can't have been more than 200 people - stunned!
Well, they missed a decent gig. I've never seen either of these before and I'm notparticular familiar with much Bachman Turner Overdrive material beyond "You Ain't Seen Nothin' Yet" and "Takin' Care of Business", but I did enjoy the majority of what was played. I've heard Mr Bachman sometimes isn't the most sociable of musicians, but he was on good form here. Hope they come back soon!

Setlist:
Let It Ride
Rock Is My Life
Hold Back The Water
Hey You
Moonlight Rider
Looking Out For #1
Not Fragile
Stayed Awake All Night/American Woman (Medley)
Four Wheel Drive
Slave To The Rhythm
Blue Collar
Sledgehammer
Rollin’ Along
Takin' Care Of Business
+
Roll On Down The Highway
You Ain’t Seen Nothing Yet
Posted by MatthewB2 at 10:43 pm No comments: