The now regular December show for Mr Baird and band. Setlist a bit mixed up and, apart from a far too long Crooked Smile, excellent as always. Joe Blanton provided a decent warmup (backed by Homemade Sin) and popped up throughout the main set too. 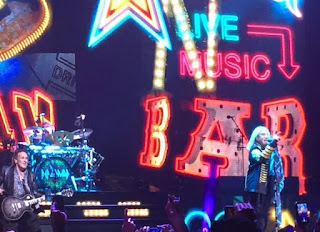 A decent double bill at the O2. Cheap Trick were as fun as I remembered. Surely no other band chucks out as many plectrums to their audience! I really enjoyed the cover of The Move's California Man.

Def Leppard were pretty solid. Whilst the Hysteria album - showcased here in it's entirety - is largely excellent, there are 3 or 4 dud tracks that don't really warrant a play, so there was a slight feeling of "it was good, but could have been even better". But let's also say the thing that has to be said. "Phil Collen. Enough is enough. You are 2 days short of your 61st birthday. Put your shirt on - no one comes to Def Leppard to see your bare torso!"

24 years of the SAS band and another popular show at Guildford. Regulars Toyah, Patti Russo, Chris Thompson and Tony Vincent are joined by Justin Hawkins from The Darkness to add a touch more sparkle and unpredictability to Spike's All Stars.