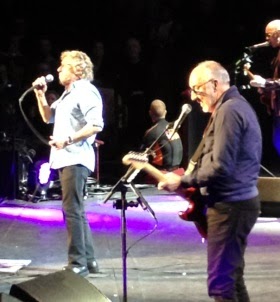 It's been an expensive week of Who shows, averaging a little under £100 a ticket. This one was well into 3 figures, but at least a top charity - The Teenage Cancer Trust - get to benefit from the proceeds. This is the 15th year that Roger Daltrey has been arranging shows in support of them and probably marks my 25th or so patronage.

We had decent seats to the side of the stage. Maybe because of that, I personally thought this was the best of the 3 shows this week. Others thought PT took quite a while to get going. You Better You Bet was a highlight for me with its first appearance this week.

I've now got a few Who-free months before Hyde Park in the Summer. Shame, as (costs aside), I'd be happy to see them every week!

Setlist
I Can't Explain
Substitute
The Seeker
Who Are You
The Kids Are Alright
I Can See for Miles
Pictures of Lily
My Generation
Magic Bus
Behind Blue Eyes
Join Together
You Better You Bet
I'm One
Love, Reign O'er Me
Eminence Front
A Quick One (While He's Away)
Amazing Journey
Sparks
Pinball Wizard
See Me, Feel Me
Listening to You
Baba O'Riley
Won't Get Fooled Again 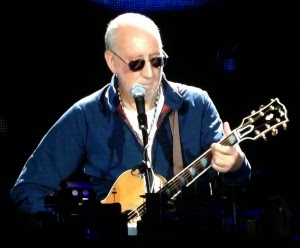 The Who pt 2. On the floor with a decent view in the back row of the front block. We were able to get these pretty good seats as a result of the postponement of these shows from December (I couldn't make the original date due to the darts!), so it all worked out well.

Certainly, being on the floor you felt more part of the show and had an excellent view of the large visuals behind the band. Daltrey was in good voice (incredible for a man of 70 actually) and Townshend's between song patter was amusing and slightly different from last night. His playing was good (as with all the band) and there were windmills a-plenty!

Shame I've still yet to hear "Long Live Rock" live in 50+ Who shows, but I enjoyed this evening. Better than last night I felt, despite the inclusion of the dreadful "Eminence Front". Some friends who we met at the show assumed the 'oo might be on their last legs - I think they were pleasantly mistaken judging from the positive comments afterwards!

Setlist
I Can't Explain
Substitute
The Seeker
Who Are You
The Kids Are Alright
I Can See for Miles
Pictures of Lily
My Generation
Magic Bus
Behind Blue Eyes
Join Together
You Better You Bet
I'm One
Love, Reign O'er Me
Eminence Front
So Sad About Us
A Quick One (While He's Away)
Amazing Journey
Pinball Wizard
Sparks
See Me, Feel Me
Baba O'Riley
Won't Get Fooled Again

Labels: O2, review, The Who

The first of a big Who week. Up in the "Gods" for this one. Despite that, sound quality was good (although arguably not loud enough) and we where able to enjoy the show. An eclectic setlist ranging from the normal brilliance to the slightly bizarre (A Quick One...) and the slightly tiresome Join Together and Magic Bus.

Great to hear "So Sad About Us" which is an early contender for my most heard live song this year. Pete Townshend was at his sarcastic best/worst with the between song comments. I suspect this makes him an acquired taste for some, but I found it amusing. I also liked his brief "Live At Leeds" intro to My Generation.

If this is to be the start of the "long goodbye" as Roger has described it, let's hope they linger around for a good while yet.

Setlist
I Can't Explain
Substitute
The Seeker
Who Are You
The Kids Are Alright
I Can See for Miles
Pictures of Lily
So Sad About Us
My Generation
Behind Blue Eyes
Join Together
I'm One
Love, Reign O'er Me
Slip Kid
A Quick One (While He's Away)
Amazing Journey
Sparks
Pinball Wizard
See Me, Feel Me
Listening to You
Baba O'Riley
Won't Get Fooled Again
Magic Bus

Labels: O2, review, The Who

The return of Thunder to mainstream shows is much welcome in my book (perhaps less welcome at home as even when they've been in retirement there seem to be several "Thunder related" shows that I attend).

Reef are the support at London's premier music venue (that place in Putney has surely lost the copyright on that phrase!), We caught the last part of their set and they were a fair bit heavier than I'd envisaged.

Thunder came on to an excellent 70's montage on the giant video screens. They are supporting the marvellous new album, "Wonder Days" which is one of the highlights in their now extensive back catalogue. Danny Bowes vocals and enthusiasm were in evidence as normal and the band as solid as ever. Of course it was great to see Ben Matthew's looking so well after his recent health issues. I did wonder if he was being eased back in with the shorter than normal set, but he more than played his part.

As you now come to expect from Thunder, a great night out.

Hopefully a fuller tour is on the cards later in the year. 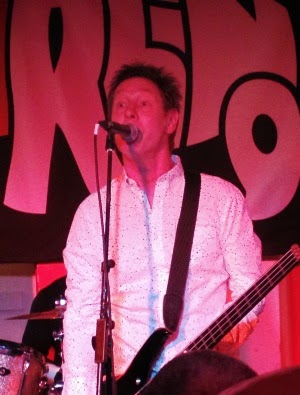 Reverting to the Rhino's Revenge moniker (from Woodedz) in support of their new CD, an entertaining evening at the 100 Club started with Quo tribute band "State of Quo" delivering a brief but fun set of Quo classics and obscurities.

Rhino with family and friends then took the stage to showcase their new CD which meant the set had a few less covers and Quo songs than normal. All were delivered well - as mentioned on these pages before, Rhino must know he's no vocalist, but that sort of misses the point of the band. People were here for a good time and in the main that's what they got. There are a few duds in the set - the perennially awful "Secretary" always grates with me personally, but some fun light hearted ditties such as "Stan The Man" provide balance with the rockier numbers. The band do a good version of Jam Side Down which is much heavier than the Quo version for example.

So, all in all a good night. The Quo collector in me was tempted to buy the CD - signed copies of what looked like a CDR were available, but they were £15 - about the same as the price of the show. In a rare moment of reasonableness, I weighed up spending the cash now on a CD which is likely to enter my CD player approximately once against waiting and picking up a bargain bin version at some time in the future. The cash stayed in my pocket.

That sounds harsher than it should, as I enjoy seeing the guys play and will happily spend money to see them again (and on a different night may have a different view on buying the CD - especially a factory produced version), but when it comes down to it will I pick "Piledriver" or "Rhino's Revenge 2" off the shelf when I next listen to some classic rock at home? I'll leave you to ponder.