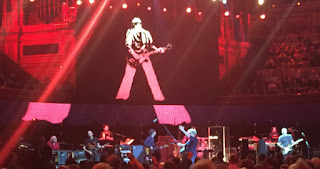 What a treat - Thunder and the Who in the same week. And as a bonus, TCT stalwart Noel Gallagher was added as a late support.

His acoustic set was a mixed bag. A few non-descript solo (HFB) songs and four Oasis classics including the dodgiest version of Wonderwall I've heard. If you are going to write one of pop's all time classic sing-a-long songs, why change it so that it has different emphasis and is much worse than it was? Leave that to Bob Dylan! The set was saved by a back-on-track version of "Don't Look Back In Anger" to finish.

Anyway, the premise for the headliners would be that this would be the World premier of "Tommy" - played acoustically. It turns out that the band felt that they couldn't make this work, so we got "Tommy" - electric!

Now I don't like to be critical of one of my favourite bands and one of the greatest of all time, but his was one of the weakest shows I've seen them do. Pete Townshend seemed pretty grumpy (I suspect he was finding it harder than normal playing a challenging set that hadn't been done for years [1989]), the sound volume was wildly inadequate (the mere thought of being able to be 20 yards from the stage for the Who and be able to talk at normal volume to your neighbour seems unthinkable) and the audience pretty static.

Still, at least we got the often dropped "Sally Simpson" and a few greatest hits afterwards, but this seemed cut short. Apparently the intro to "Welcome" was played for the first time since 1969 by those in the know! But there was definitely something lacking. I'm at Birmingham in a few weeks with a different set promised - let's see how that goes!

Setlist - Noel Gallagher
Everybody's on the Run
Supersonic
If I Had a Gun...
Half the World Away
Wonderwall
AKA... What a Life!
Don't Look Back in Anger

Setlist - The Who
I Can't Explain
Substitute
+
[Tommy]
Overture
It's a Boy
1921
Amazing Journey
Sparks
Eyesight to the Blind
Christmas
Cousin Kevin
The Acid Queen
Do You Think It's Alright?
Fiddle About
Pinball Wizard
Go to the Mirror!
There's a Doctor
Tommy Can You Hear Me?
Smash the Mirror
I'm Free
Miracle Cure
Sensation
Sally Simpson
Welcome
Tommy's Holiday Camp
We're Not Gonna Take It
+
Won't Get Fooled Again
Join Together
Baba O'Riley
Who Are You

One of Britain's top rock bands in one of the World's great venues - what's not to like? Well, the venue name of course - I'm not going to call it the Eventim Apollo.

Regular readers of the blog would have known exactly where to find us in the venue (to within a couple of metres) and Danny and the boys were on excellent form. Their new album, "Rip It Up" has been a bit of a slow burner for me - especially after the fantastic "Wonder Days" predecessor. It is growing on me a bit and the new songs worked well in a live setting.

The normally excellent Lynne Jackaman appeared for some background wailing in the encore on "She Likes the Cocaine" and unfortunately it was wailing - her fantastic vocals not really shown to their best ability in my opinion.

So like pretty much every Thunder show I've been to, this was really good. It just didn't quite feel as much fun as normal for some reason. Can't quite put my finger on why. 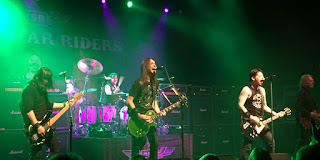 I primarily went along to this on the basis that Rich was going, the tickets were quite good value and Gun were supporting - who I'd not seen before (certainly in this incarnation). In the event a secondary support was added, pushing Gun down to 3rd on the bill, which was a bit of a pain (shorter set, earlier start etc).

Still, they were OK. Having gone through several vocalists it turns out that the founder member and bass player is now on singing duties. He was fine and the set was pretty decent - even my pet hate "Word Up" sounded bearable.

The other support band were not bad either, but I can't remember their name. The Black Star Riders seem to be shifting away from their Thin Lizzy history and only "The Boys Are Back In Time" was covered here. You would have thought St. Patrick's Day would have yielded "Whiskey In The Jar"! Still, they are a decent rock band and vocalist Ricky Warwick has a fantastic voice. I enjoyed their set despite not knowing the songs, which is a bit of a theme for my recent visits to the Forum (or the "Town & Country" as I prefer to call it!)

Setlist - Gun
Let It Shine
Word Up!
Don't Say It's Over
Better Days
She Knows
Steal Your Fire
Shame On You

With no February shows, this was my first gig in ages and a decent tribute act to the fine music of Creedence Clearwater Revival and John Fogerty. Thought the singer was really good - he'd be an excellent fit in the current incarnation of Slade. And for a casual fan of CCR and JF, they played pretty much everything I expected to hear.