Off to the Great British Beer Festival tonight where The Hamsters are providing the musical entertainment. We chose this night on the basis that a) it's Friday! and b) they looked far and away the best of the music acts on. They've played the Boom Boom club in Sutton a fair few times, but I've never seen them. Should be some Bluesy Rock with ZZ Top and Hendrix covers thrown in.

Well, sure enough - that's how it turned out. The Hamsters were OK - their guitarist who goes by the name of "Slim" was quite impressive, but for a show like this I maintain that you need an emphasis on material that non-fans will know. Whilst I quite like ZZ Top and can take or leave Hendrix material, I'm not sure the same can be said for most of those in attendance. The original material was listenable too, but not enough to make me want to pay to see the band again. What was obvious (and despite the instrument swapping during the last number, "Sharp Dressed Man"), was despite the competance of the bassist and drummer, they really looked a "one man band". I don't mean any disrespect by that, it's just how it came across.

Anyway, the beer festival itself was OK. It suffered (as normal) from excessive queues - especially around the "Biere Sans Frontier" section (ie Pilsners / Lagers / Specialist Imports etc) and at up to £4.20 a pint was not cheap. The "Golden Beer" winner (whatever it was called!) from Nottingham was pleasant enough, but when you have to wait 15-20 mins to get served for each drink it does take away the fun somewhat.
Posted by MatthewB2 at 1:08 pm No comments: 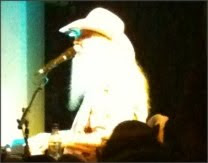 A trip to the Jazz Cafe to see Leon Russell - an artist who has the "legendary" tag pinned to him and is likely to aquire more UK prominence in the near future when his duets album with Elton John comes out. Suprisingly, there was absolutely no mention of that collaboration during the 80 minute set (straight through - no encore) of Southern bluesy guitar and piano with a bit of storytelling thrown in for good measure.

Starting with his most recognisable song, Delta Lady, the sound and vocals weren't great, but did improve. You have to say, that whilst his piano playing was good, the vocals were that of a 68 year old. A fair few cover versions were thrown in later which kept things enjoyable, but this was a pleasant if not outstanding evening. In summary, I'm glad I've seen him - but suspect this will be a one-off for me.