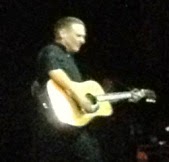 No shows in August means it's been a while since the last updates. This was the first of 3 anticipated trips to see Mr Adams this year - this one an acoustic outing as part of his long-standing "Bare Bones" tour. I'd found out earlier in the week that some friends of ours were going too, so we met in a pub in the Laines. Unbelievably, it turned out that they had 2 row G tickets right next to our 2. Bizarre coincidence!

The show was good. the only downside was the number of ballads played - but I guess that's always likely with an acoustic show. The up-tempo numbers were better received - Run To You, Summer of '69, When You're Gone etc together with the new song "She Knows Me". There were some amusing anecdotes between tunes too. It was a good evening, but I predict the full band shows coming up will be better!