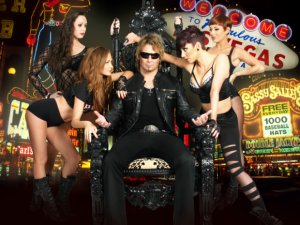 Purely by chance I noticed an advert for this online. Having enjoyed Mr Parr's support slots at the Borderline and Hammersmith over the last couple of years, it looked a good oportunity to see him, albeit in the confines of a stage production.

That production basically involved a particularly thin plot used as an excuse to perform classic American rock songs. The performances ranged from OK to actually pretty good - the guy playing the preacher (Rob Castell) was particularly entertaining and Rebecca Kelly was probably the pick of the female vocalists. A more than competent live band ensures that the numerous tunes played (Bon Jovi, Springsteen, Eagles, Journey, Guns 'N' Roses, Elvis etc) were well received. The blokes in the audience were also rewarded with an attractive quartet of dancers/backing singers who as well as performing well, seemed to appear in skimpier and skimpier outfits as the night went on.

So, good music, thin plot - where does Mr Parr fit in? Errr, well he didn't really. They basically stopped the play so that he could appear in some sort of "guest spot". He then churned through "Naughty Naughty" with the band and "Coming to Wimbledon" & "Oh Well" acoustically before a predictable (but excellent) "St. Elmo's Fire" back with the band. He did appear later in the encore, but it was clear that his name is only on the show to sell a few more tickets (and sell a few copies of his new CD afterwards). So, if you'd come only expecting to hear a lot of John Parr material you'd have left disapointed. Let's hope for a solo tour soon and regard this show for what it was - a bit of fun and a vehicle for some classic songs.

We retired to Wetherspoons Pub afterwards and were joined by pretty much the entire cast (minus Mr Parr). Regrettably the dancers were more appropriately dressed by then!