One Liner:  Slady (all female Slade tribute) had a guest (male) drummer and exceeded all expectations - they were really good. The Glitter Band were not the version we had seen previously with a decent vocalist (John Springate). This was John Rossall's version. Whilst a key member back in the early 70's, John played trombone - and there's a reason for that I'd suggest. A fun singalong due to the crowd, but otherwise not great. 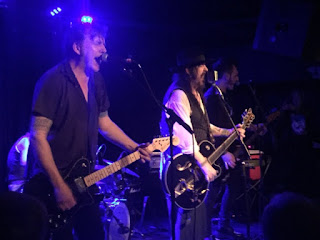 One Liner: Very enjoyable show from the Black Country rocker and chums. The Lexington was a new venue for me and it was one of the shows where not knowing 90% of the songs made little difference to how enjoyable it was. Most of the people standing around us seemed to know every word to every song, so someone out there must have the setlist!?