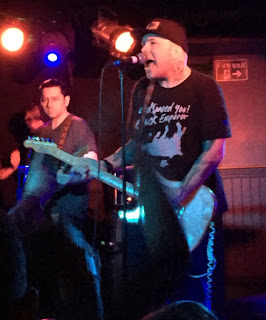 Brief Review: Excellent show from Kris Roe and band celebrating the 15th Anniversary of their classic "So Long, Astoria" disc. Despite me leaving the "print at home tickets" err.... at home... we were able to get into the venue in time, despite the band coming on 15 minutes earlier than advertised. The set included a number of solo performances that didn't seem to make it into many other shows, so we were lucky indeed. I had forgotten how good the aforementioned album was and so, this was a really good evening.

Setlist
In This Diary
Unopened Letter to the World
The Hero Dies in This One
The Saddest Song
Summer '79
All You Can Ever Learn Is What You Already Know
My Reply
The Boys of Summer
Radio #2
Looking Back on Today
+
San Dimas High School Football Rules [Kris Roe Solo]
Oh, Kansas City [Kris Roe Solo]
Broken Promise Ring [Kris Roe Solo]
Takeoffs and Landings
Eight of Nine
So Long, Astoria
+
I.O.U. One Galaxy [Kris Roe Solo]