Back to Stamford Bridge for a rare outing from the former Small Faces / Who drummer. With the fantastic Robert Hart on vocals, this was an enjoyable romp through some classic rock of the 60's and 70's. It was good - but far too short. Surely it would not have been much to ask to sneak in another 4 or 5 Small Faces and Who Tracks.

Dave "Bucket" Colwell joined in for the 2nd Bad Company song and the "Free" encore. Last saw him with Jim Cregan at Sutton United - perhaps he only plays football grounds these days!

Interestingly, besides the time I saw Andy "Thunderclap" Newman, I have not seen less interaction between the named act an the audience - Kenney did not utter a word in our direction. can only assume he is shy.

So, good, but was hoping for more. 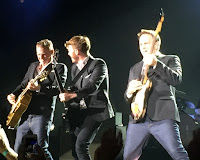 And here it is - yet more Bryan Adams (it has been a vintage year!). Down at the seaside again - another solid show (surprisingly not sold out) and the bonus of an acoustic "Hearts On Fire" plus a view "down the front". Bryan and the band (including the bassist from "The Feeling") have been on great form this tour - hopefully his next album will build on the success of "Get Up" and be a real rocker.

* Hearts On Fire might not be in the precise setlist location

A nice evening of racing in the sun (with sadly very few winners) followed by a sold out concert. They could have done with a few more speakers towards the back as the light wind affected the sound badly. As the children were in tow, we spent most of the show miles away and although from what we could here sounded good, it did detract from the normal enjoyment I normally get from Bryan's shows. Still, that aspect will be put right again very soon!