From The Jam - Friday 16th January - Under The Bridge, Chelsea FC 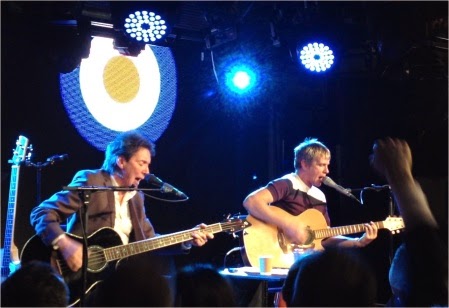 My first show of 2015 and it's at a new venue. Under The Bridge is part of Chelsea's Stamford Bridge ground - under one corner of the massive East Stand.

I'd heard that it is used more often as a nightclub than a music venue, but I was really surprised and impressed by what a nice venue it is.

After a quick game of darts in a nearby pub (the Fox & Pheasant) where the 2 guys on the board very kindly let us challenge them (and we sneaked a 2-1 win), we got in pretty early as we were keen to catch the support in the form of Simon Townshend. Simon was on good form, mixing in new material with a couple of oldies, although surprisingly not "The Way It Is". Unfortunately his set was pretty short - we'll certainly look out for any solo shows later this year.

So confession time - I was never really a massive fan of The Jam and wouldn't profess to know much of their material. What I did know was that the 3 piece here included original Jam member Bruce Foxton; the show was an acoustic one; and after that I was taking a bit of a leap into the unknown.

An hour and a half later, that had all changed. Turns out I know (or at least recognised) many more Jams songs than I thought I knew and I had a great time.

Guitarist / Vocalist / Stuart Pearce look-a-like, Russell Hastings, did a great job. He wisely didn't try to replace Paul Weller in a note for note style, but stamped his own personality across the songs. The audience seemed to have a great time, singing along enthusiastically. I had wondered if it may get a bit boisterous, but with a primarily middle-aged audience and with looking security the type you wouldn't mess with, there was no hassle at all - even with our vantage point (the standard front and left). To make the evening even better, we got a Who song - So Sad About Us.

I shall return - both for the band and the venue.

Setlist
Saturday's Kids
When You're Young
David Watts
To Be Someone (Didn't We Have a Nice Time)
Thick as Thieves
Man in the Corner Shop
It's Too Bad
Smithers-Jones
Strange Town
Burning Sky
So Sad About Us
Little Boy Soldiers
That's Entertainment
The Butterfly Collector
Slow Down
Start!
Town Called Malice
Going Underground
+
The Eton Rifles
Heatwave
Down in the Tube Station at Midnight