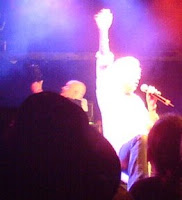 A trip to the West End for the Brummie rockers. An interesting train journey up (with "Nutters 'R' Us" out in force - I think our American friends use an excellent term - "Whack-job"), where we avoided getting attacked by lunatic in commando gear and then out at Victoria in the pouring rain to catch a 38 "bendy bus". This got stuck in traffic along Piccadilly, so off we got and legged it to the nearest bar - absolutely soaked. After a mini-crawl of 3 half pints, I grabbed some "food" in the gormet capital of London, McDonalds. It was there that I bumped into Thunder's Harry James ('Arry, 'Arry!), recognisable by bald head and Crystal Palace scarf. It transpired he wasn't drumming tonight, but was going to have a few beers instead. Good man! Just time for a beer in the "new" Intrepid Fox rock bar and it was time to go into the venue.

The show itself was good. The Mean Fiddler is back as the "Astoria 2" these days, but inside it's still the same maze of stairs and doors. Got down near to the front on the left and were treated to over 2 hours of Magnum classics, including the whole of the "Wings of Heaven" album. A busy, if not full, crowd seemed to enjoy the whole thing and were enthusiastic in their participation, no doubt aided by the Red Stripe and Tuborg available. The live CD of the show, due next year, should be a good one.
Posted by MatthewB2 at 1:34 pm No comments:

Our annual jaunt to the Fairfield Halls for some more Quo. A bit of light refreshment in "The Brief" beforehand and then onto the venue. It always amazes me how elderly the staff are here - I can only assume they work on a voluntary basis.

Anyway, we had good seats in row "E" which turned out to be the 3rd Row in front of "Rhino". Not surprisingly, same set as last week. There was also a bit of trouble with a very drunk/stoned bloke causing trouble, although apparently the night before there had been a more serious altercation at the front. What is the point in turning up to these things in that sort of state? Anyway, my prediction is that by the next time I see Quo (Brighton next month), "Gravy Train" will have been dropped from the set.
Posted by MatthewB2 at 1:24 pm No comments: The start of the "In Search of The Fourth Chord Tour" (well second night anyway). Will they change the setlist we were asking pre-gig. Errr... predicatably not much at all, which is a real shame. Despite claims from the band that "they try other stuff in rehearsal which may or may not work", the reality is that most of the set is the same as last year (and the year before).

But to be fair, that doesn't make it a bad show - it's just a bit frustrating as it could be even better with a bit more thought and effort. The Cliffs Pavillion was sold out and we couldn't get near the bar when we arrived. Not a big deal as we had sampled a couple of Southend's "finest" bars before the show. Managed to get a good spot 10 yds or so from the barrier behind some very excitable lads who had clearly enjoyed the bars more than we had. Despite their drunkeness, they at least bumped, barged and jumped with each other as opposed to innocent bystanders and didn't cause too much trouble apart from annoyingly throwing their empty plastic glasses when they'd finished. The nearest bouncer seemed to be paying more attention to the blonde girl in front of him than any crowd control issues!

Anyway, as I say, predictable set, with the addition of 2 tracks from the new album (Beginning of The End - good, Gravy Train - not so much). The songs seemed to be played with enthusiasm and were quite "heavy" which is always good, although the elongated drum solo was (like pretty much every drum solo I've endured) quite skillful, but pointless. They really should be banned!

Best surprise of the evening was the extended "Bye Bye Johnny" with completely different arrangement from normal - I thought it was excellent.

Setlist:
Caroline
Something 'Bout You Baby I Like
Don't Waste My Time
4500 Times
Rain
Paper Plane
Beginning of The End
Gravy Train
All Stand Up (Never Say Never)
The Oriental
Creepin' Up On You
Proposin' Medley / Big Fat Mama
Gerdundula (with Drum solo)
Roll Over Lay Down
Down Down
Whatever You Want
+
In The Army Now
Rockin' All Over The World
Bye Bye Johnny