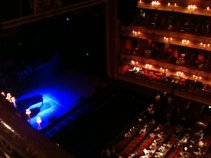 Elton has done a few of these "smaller" shows recently - Obviously the one I went to at the Roundhouse last year, but also the Union Chapel in Islington. This one at the Royal Opera House was a benefit for the Royal Society of Music (Elton is a patron) and featured percussionist Ray Cooper who I hadn't seen for years. Not being able to afford the 4 figure stalls seats (!) we were really "up in the gods". And - huge mistake - picked the wrong side of the venue, meaning we couldn't actually see Elton as he played the Piano!

I'm not going to go into too much depth, but it was pleasant enough, but some of the lesser known numbers weren't up-tempo enough for my liking. Ray Cooper was his normal excellent self (and from our distance still looked the same as 20 years ago) - and he provided the most amusing moment when he "forgot" to bang the massive gong which had taken hours to set up!).

Note quite enought to hold my full attention for the 2 hr show though. Mental note to self - "Go to see Elton when he has the full band"


Setlist
Elton Solo
Sixty Years On
The Greatest Discovery
When Love Is Dying
I Guess That's Why They Call It the Blues
Rocket Man (I Think It's Going to Be a Long, Long Time)
Never Too Old (To Hold Somebody)
Philadelphia Freedom
Your Song
+
Elton with Ray Cooper
Funeral for a Friend / Tonight
Better Off Dead
Levon
Gone to Shiloh
Indian Sunset
I Think I'm Going to Kill Myself
Sorry Seems to Be the Hardest Word
Take Me to the Pilot
Don't Let the Sun Go Down on Me
Bennie and the Jets
Crazy Water
+
Elton Solo
Candle in the Wind

Another trip to Putney and an enjoyable evening of Rod Stewart's early hits played by the original touring band from the era. Had a nice chat with Jim Cregan afterwards who seemed a very pleasant chap. Also spotted Queen backing vocalist Zoe Nicolas enjoying the show at the front, although she turned down Robert Hart's offer of a duet for "Stay With Me".
Posted by MatthewB2 at 4:51 pm No comments:

When tickets went on sale for this, my immediate thoughts were:
The last issue was likely to cause concern as Richard and I thought we couldn't justify £132 for a ticket. This was luckily resolved by Rich managing to acquire a pair of "bargain" £49.50 standing tickets (back of the stalls) the nano-second they went on sale.

So we got in quite early to nab a standing sopt and were quite please with the view, standing about 4 feet from people who had paid considerably more for the luxury of a seat. The early entry to the venue managed to confuse me enough that I knocked a substantial amount of beer out of the hand of a fellow punter as I swung 'round to talk to someone. Cue a trip to the bar to buy him a replacement!

Anyway - the show. Due to start at 7:30, it kicks off at 7:45 with an intro from Harvey Goldsmith. After that and a few videos it's time for some music. I've never been a fan of Richard Ashcroft and the 4 acoustic numbers he performed here were never likely to change my mind. Competent, but forgettable.

Roger Daltrey and band then appeared for a couple of obscure Blues numbers. Now I would happily watch Roger perform any stuff he wanted, but a full set of this style would be a bit challenging. Still, 2 songs worth was fine and a bit different.

We'd speculated on the acoustic numbers Bryan Adams would play on the back of his recent "Bare Bones" tour and he opted for a few old favourites like Cuts Like A Knife and Straight From The Heart as opposed to maybe more obvious hits. Still, after a quiet start, the audience seemed to like him. He also invited a beneficiary of the charity (who's name he mixed up with the Teenage Cancer Trust (!)) to come and duet on "When You're Gone" which was a nice touch.

Then an interval followed by Jeff Beck. Mr Beck was on fine form. Backed by the rest of the Who's band (ie no Daltry or Townshend), the highlight for me was an excellent "A Day In The Life". Then Debbie Harry pops up for Heart of Glass and Call Me which I bet Mr Beck has never played before. Still, this was excellent and Debbie was in good voice. After another Blondie number it was time for the main event - The Who.

This is who nearly everyone had come to see and a storming trio of numbers kicked things off - Townshend on great form and Daltrey's voice strong.

Sadly as Won't Get Fooled again ended, off went Townshend and we got some more blues from Daltrey and Beck.

The Ensemble all re-appeared (minus Ashcroft) for a lengthy "Join Together" with Daltrey and Adams swapping lead vocals. And then off they went. H'mm wait a minute - it's only 10:25 (ticket said 11pm curfew). As the crowd yelled for more, Harvey came back, said goodnight and the house lights came up. Now don't get me wrong, the show was really good, but if you are paying £130 as many did, is it not reasonable to expect more than 21 songs over 2.5 hrs? Or at least more than 4 from the Headliners?

If I'm being unfair there and Townshend's hearing problems were shortening things, then 1 or 2 more songs from each of Ashcroft, Adams, Harry & Beck would have spun things out to an acceptable degree. So, despite a feeling of being sold slightly short, the excellence of what we did see outweighed the negatives.

Let's hope for a full Who show sometime soon.

Jeff Beck
Beck's Bolero
Hammerhead
A Day In The Life

Debbie Harry
One Way Or Another

Ensemble
Join Together
Posted by MatthewB2 at 5:02 pm 2 comments:

Happy New Year to all.

Here's my annual look back over the year from a "best of" and "worst of" perspective of the 31 gigs seen during 2010 (ironically - exactly the same number as last year!)

1: Belinda Carlisle - Jazz Cafe
Forget the fact that this was "acoustic", this was Ms Carlisle at her most enchanting.

1: Band of Skulls - Electric Ballroom
I wasn't expecting much and I didn't get it!

2: Leon Russell - Jazz Cafe
Sound problems on the vocals made this much anticipated show a bit of a let down.

3: Sheryl Crow - Borderline
Could have been so much better!

"honourable mention" to "Plan B" for the worst performance of this year (or pretty much any other) when guesting with Elton John. I still can't quite deascribe how painful it was!

No gigs at the Hammersmith Apollo robs it of its normal top spot!

1: Roundhouse
(I know it's iconic, but a few more toilets and a chance of getting to an outside bar surely isn't too much to ask!)

Interesting that I have managed to avoid the O2, Wembley and Hammersmith for the whole of 2010. Can't remember the last time that would have happened. Must be the cost of the shows there!

1: Less and and less drunks at gigs. Mind you with the bar prices as they are that's no surprise.
2: Local Bands. Great shows (and good value) from the likes of "The Mods", "Apart from Rod" etc.

1: Prices. Surely there will be a point where more people say "no thanks".
2: Merchandise quality just isn't tempting enough still for most artists.