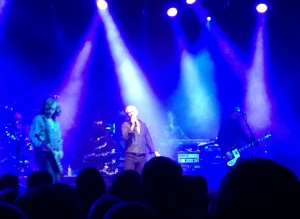 Off up north for what is becoming an annual trip for Thunder's Xmas party. Thankfully the band have heeded their public and moved on from the dreadful Rock City in Nottingham and this was our first visit to the Manchester Academy. And what a difference! A venue which you could get into easily. A venue where the audience all have a clear line of site to the stage (height permitting!). A venue with ample bar staff to server everyone quickly (and at fair prices). Toilets that you could get into with out a massive queue. And a large friendly crowd without a crush. If Carlsberg did venues...

The show itself started a little slowly. I know the band want to mix things up (after all there's a CD or 2 to come from this), but a start including obscure tracks from the pretty average "The Thrill Of It All" album had some punters scratching their heads somewhat! Things livened up a bit with "Low Life In High Places" and from there on in a good time was had by all. Sad to say we didn't recognise a Deep Purple cover - "Might Just Take Your Life", but and excellent "Jet" and "Hammer To Fall" were spot on.

The band seemed to be enjoying themselves and I can't help wondering if the 2013 tour with Journey and Whitesnake may jolt them out of retirement once again. In any case, there are rumours of the Xmas shows continuing but changing venue each year. I hear Brighton is very nice in December and gives the opportunity for a few Quadrophenia covers! Bell Boy!

Setlist
Stand Up
The Moment Of Truth
Does It Feel Like Love?
Weather With You
This Forgotten Town
Don't Wait Up
I'll Be Waiting
It's Another Day
Low Life In High Places
Amy's On The Run
+
Backstreet Symphony
The Devil Made Me Do It
Until My Dying Day
Might Just Take Your Life
Jet
Numb
Isn't It Time
River Of Pain
On The Radio
Hammer To Fall
Love Walked In
Dirty Love
+
Born To Run
I Love You More Than Rock 'N' Roll
I Wish it Could Be Christmas Everyday
Posted by MatthewB2 at 12:48 pm No comments:

Third gig in 4 days for me and off to the Shepherd's Bush Empire. We are here primarily for the Quireboys who are support, but also taking a first ever look at Thin Lizzy who are supposedly on the last night of their "farewell tour". Yeah, we've all heard that before.

The Quireboys were good - a fairly safe set - and Spike worked hard to engage with the pretty sparse crowd. Looking forward to a new album and shows in 2013.

Thin Lizzy's crowd had swelled slightly (maybe 2/3 capacity on the floor and a reasonable filled level 1 seating). Setlist was predictably greatest hits based and whilst Phil Lynott is generally regarded as "irreplaceable", Ricky Warwick and the rest of the plectrum flinging band were good fun. I may be tempted if and when they tour again.

THIN LIZZY
Are You Ready
Jailbreak
Don't Believe A Word
Killer On The Loose
Chinatown
Dancing In The Moonlight (It's Caught Me in It's Spotlight)
Massacre
Waiting For An Alibi
Angel Of Death
Still In Love With You
Whiskey In The Jar
Emerald
Suicide
Cowboy Song
The Boys Are Back In Town
+
Rosalie
Black Rose
Posted by MatthewB2 at 12:52 pm No comments:

Night 2 of 2 and a similar position on the floor. Despite my words yesterday, the set wasn't quite as different as you may have expected, but the show of hands from the audience suggested around a 25% "return rate". Few will have left disapointed after another top notch perfomance.

Setlist
Dixie Beauxderaunt
Open All Night
L'il Bit
Crooked Smile
Fall On Me
Keep Your Hands To Yourself
Lazy Monday
Railroad Steel
1000 Promises
Don't Pass Me By
Two For Tuesday (inc Hey, Tonight / Proud Mary)
I Dunno
Julie & Lucky
I Love You Period
On My Way
She Dug Me Up
Sheila (inc I Wanna Be Sedated)
+
All Over But The Cryin'
Dan Takes 5
Posted by MatthewB2 at 12:46 pm No comments:

The first of 2 nights of Dan Baird & Homemade Sin at the Borderline. Going both nights you ask? Of course! Why? Because tomorrow will almost certainly be a completely different set.

Those "veterans" of this seemingly now annual double headers will know what to expect. A hot sweaty venue, loud rock 'n' roll and a great time. This didn't disapoint and it was actually a little more comfortable on the floor than normal.

Setlist
Well Enough Alone
I Dunno
Crooked Smile
Nights of Mystery (inc Get It On)
1000 Promises
Julie & Lucky
I Love You Period
I Want You Bad
Keep Your Hands To Yourself
Two For Tuesday (inc Hey, Tonight / Proud Mary)
Dunk 'n' Dine
She Dug Me Up
Worse For Wear & Tear
All Over But The Cryin'
Dan Takes 5
Younger Face
Railroad Steel
+
Sheila (inc Do You Wanna Dance)

A Monday night and a solo trip down to the Brighton Centre for Quo. I would've gone for next week at the O2 in London had it not been for the fact that tickets are already booked for the PDC Darts World Championship at the Ally Pally.

None of more Quo-fan mates would join us on the basis that: a) it's a Monday Night. b) it's down in Brighton. c) they'll play that Christmas nonsense again, won't they? d) Why haven't they got a top-bill support act? and e) I'll save my cash for the reunion next year.

So, despite the fact it was the worst night of the week for a gig, I decided to go rather than miss out. I too was rather unsure about the choice of "Eddie and the Hot Rods" as support, but they played a competent set, albeit to a very reserved, seated audience. The 2 covers at the end, Gloria and Born To Be Wild fited in well with the rest of the set. I'll look out for them if they play the Half Moon again, but suspect they were punching above their weight in an arena setting like this.

Speaking of the arena, there were a fair few empty seats - especially at the sides. I guess that means that many shared the view of my mates and gave this a miss.

So, the show itself. Well I enjoyed it - indeed the first 9 songs or so were amongst the best selection I've seen the guys play for a while. I could live without the middle bit of the set (except Living on an Island which I like), but I don't agree with the abuse that the band get on their own site message board from people who say it's a "disgrace" that they play "Marguerita Time" etc and they'll never go again. Get a life! If you don't like a song, go to the bar when it's on! How can one or two songs ruin a gig where you like the other 20? What nonsense! I also quite enjoyed longer versions of some of the songs than previously and a bit of a mix and match of some of the medley material.

What I would say though, is that the close to the main set is becoming very predictable and really does need a shakeup. Recent years have seen the band whizz through an encore as if they can't wait to escape, but I anticipated a couple of changes this time around.

That said, with hindsight, I should have skipped the encore to get the early train home (the danger of keeping the setlist secret from myself!). Still I did get to hear part of "It's Christmas Time" live for the first time. Shame there was no "Don't Waste My Time" (there was in Europe), but I'm now really looking forward to the reunion shows in March.

Setlist
Caroline
Paper Plane
Hold You Back
Rain
Mystery Song
Rock 'n' Roll 'n' You
Beginning Of The End
What You're Proposing / Down The Dustpipe / Wild Side Of Life / Railroad / Again And Again
Big Fat Mama
The Oriental
Creepin' Up On You
Marguerita Time
Living On An Island
In The Army Now
Drum Solo / The Killer
Roll Over Lay Down
Down Down
Whatever You Want
Rockin' All Over The World
+
Walking In A Winter Wonderland / Rocking Around The Christmas Tree / It's Christmas Time
Burning Bridges
Posted by MatthewB2 at 8:34 pm No comments: