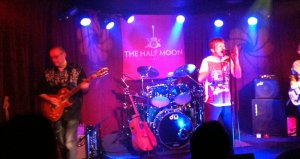 When we booked this, the show was meant to be "4 Bills and A Ben" featuring Quo's John Edwards. Not sure what happened thereafter, but it turned into a show from lead man Johnny Warman's other projects - All Right Now (a tribute to Free and Bad Company). Just as well we like both of those bands!

Unfortunately, we seemed keener than most. A sparse crowd (50-60 tops!) meant the venue appeared nearly empty. Thankfully, this didn't stop the band putting on a really solid show.

Jeff Rich (ex Quo) was on drums - I'd forgotten how short he was! The guarist did a pretty good job, especially when covering on those songs where the original had multiple guitars or keyboards. Highlights for me were "Movin' On", "Wishing Well" and the encore - "The Hunter". All in all, a nice evening of good music (as always with Johnny), but I have my doubts as to whether there's an ample audience for the band to carry on playing shows in this form. I hope I'm wrong!
Posted by MatthewB2 at 11:20 am No comments: