Supported by Brijitte West and the Gasoline Queens

Details to follow
Posted by MatthewB2 at 11:17 pm No comments: 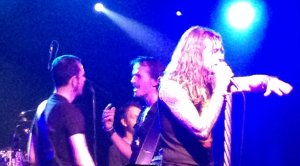 So, approximately 19 years after I last saw them, the Little Angels are back! Primarily reforming for the Download Festival, this warm-up show wasn't ideally situated, but Rich and I gambled on being able to get home via a route involving the Oxford Tube and the District Line via Notting Hill, thus narrowly aoiding the need for several nightbuses.
The Cowley Road area of Oxford isn't the best, so we headed to the City Centre for a couple of beers first - including a stop in my favourite Oxford pub, The Turf Tavern. A walk to the venue involved a successful (for me!) game of Bar Billiards and a snack from the local Tesco's.
The venue was pretty busy. Knowing it would be loud, I was trialling my new "acoustic earphones" which turned out to be a little too efficient. The show itself was good and most of the old favourites got an airing including my favourite - "I Was Not Wrong". Sadly a shortish set couldn't find any room for covers - I'd been hoping for an "England Rocks" or "Won't Get Fooled Again". I've got to be honest though and suggest that good as the show was, it didn't quite match the anticipation for me that preceded it. Hopefully the band will continue though and I'll get another chance to evaluate soon.