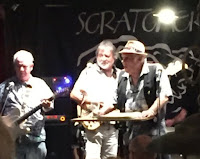 Hadn't seen Jackie for a while, so took took the train out to the country for a free pub show. Standard affair of rock, blues and Quo references, although Jack was feeling the heat a bit and was struggling to breath on occasions, meaning a shorter than normal set. Good to see "Tulsa Time" remains a staple on the set!

Seriously hot in the pub (who don't open the doors when there is live music on!), but well worth the notes put into the collection bucket at the end and the gamble of the last train home. 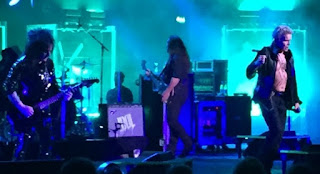 Mr William Broad must be a creature of habit. If he plays a headline show in London, you know it is going to be at Brixton! Not my favourite venue, but far from the worst (as long as you are downstairs), so we saunter off to the Academy for an evening of punk and pop. It's sold out, so we don't leave it too late before going in - with a stop to collect the tickets on the door (despite paying for delivery!)

The venue is pretty full and the show good - with a fairly predictable set. No complaints here though - enjoyable as always. 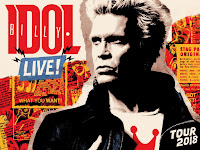 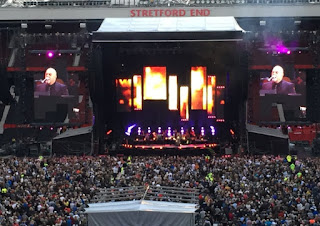 Billy Joel's only UK show for 2018 is at the home of Manchester United, Old Trafford. Heavy security, triple bag scans and long queues to get in didn't deter a sell out crowd from largely being in place for the start of the 2.5 hour show (although reports of viewing difficulties from the side of stage did materialise later).

We had no such issues being face on - albeit miles away from the stage. The volume was surprisingly loud and Billy seemed to be enjoying himself. Personally, I enjoyed the various snippets of songs paying homage to British Rock bands through the years, but I would expect some fans who maybe hadn't seen him so often would rue the omission of songs such as "Only The Good Die Young" due to time constraints. "Big Shot" was also on the original scheduled setlist, but is no loss in my book!

The Battle Hymn of the Republic (interpreted in these parts as "Glory Glory Man United") was a cheeky introduction and Billy's humour was evident throughout. He was also armed with a fly-swatter which was twirled like a drumstick throughout the show when one hand was enough on the piano.

"Half a Mile Away" got a European debut and the crowd seemed to enjoy the "fielder's choice" option of choosing the set on 3 songs. "Just The Way You Are", "An Innocent Man" and "And So It Goes" missed out on selection.

A quick mention must be made of Tommy Burns, who's guitar playing was fabulous and seemed to enhance the rockier elements of the set.

Overall, a really good evening - made even better by the fact that the hotel was a 2 minute walk away!