A local show for the excellent Free / Bad Company / Led Zeppelin tribute and a venue I had not visited before.

Personally I could have done with the set having more Bad Co and less Zeppelin, but it was an enjoyable evening. The lead guitarist was particular impressive. It just proves once again that there are some really talented musicians out there and good quality local shows to go to without spending a fortune.

I liked the venue and will look to return soon. Check the the band out too if this is your kind of music, although their online presence is lacking somewhat.

More Quireboys and an electric show in Islington. Spike and the boys seem to favour Sunday nights in the capital - assume the venues are cheap then!

Decided to skip the ridiculous number of support acts (please stick to one maximum) and the venue was pleasantly busy enough without being packed. Only downside was not being able to get a phone signal or WiFi to enable the O2 2 for 1 Tubourg offer!

Show was good - with a slight change of set from recently. Loads of old favourites and a vocal audience. A real surprise with Black Mariah being in the encore too. 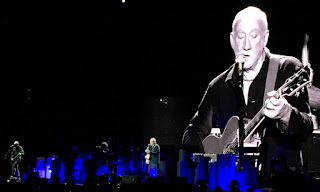 I had not been to Birmingham's Barclaycard Arena since December 2008 when it was the NIA and Elton John described it as the worst venue acoustically he had ever played in. It seems to have been spruced up a bit since then and is set in a nicely regenerated part of Birmingham alongside the canals.

The day hadn't got off to the best start with it taking four and a quarter hours to navigate the 140 miles to the venue. However, after a brisk pizza in Coast 2 Coast, we grabbed our seats. As the show had been moved from last year (when it was due to be at the NEC), we knew we were in the front row on the side tier, but were slightly further back that anticipated. This didn't really matter as the view was excellent, but the legroom very limited! I chose not to go to the bar as the queues for a beer (and the gents!) were massive!

Still, what a difference from the Royal Albert Hall. This was brilliant; much better sound, band clearly enjoying themselves (last night of the tour) and Townshend on exceptional form. Loads of guitar crunching and soloing - even a "knee slide" in Won't Get Fooled Again - who would know he was in his seventies. Likewise Daltrey, back to form vocally with a great performance. I really can't describe how uplifting this was after the disappointment of the other week. The lighting, sound and videos where top notch too.

The only dip was the turgid "Join Together". We got a rare "Relay" at the end - strange choice to finish (very hardcore!), but I was particularly pleased to hear "Bargain" and "You Better You Bet"

Fantastic stuff! Now who wants to give me a few thousand dollars for their Vegas residency?!

Setlist
I Can't Explain
The Seeker
Who Are You
I Can See for Miles
My Generation
Bargain
Join Together
It's a Boy
1921
Christmas
The Acid Queen
I'm Free
Amazing Journey
Sparks
Pinball Wizard
See Me, Feel Me
You Better You Bet
I'm One
The Rock
Love, Reign O'er Me
Baba O'Riley
Won't Get Fooled Again
Relay