It's Griff's birthday celebration in Bedford where the Quireboys are "Keeping Rock And Roll Alive" with an electric show in his home town. It turns out to be an epic adventure.

I plan to meet Rich at Kings Cross to watch Arsenal thrash Southampton on TV and the "helpful" Thameslink staff in the ticket office refuse to sell me a "from boundary zone..." ticket for Richard as he is not with me and I don't have the travelcard part of his ticket. This leads to a "discussion" where I point out that all I need to do is to "go round again" and show my ticket to buy the same thing again. I am told this is "illegal!". As there are only 2 desks open and would be easily spotted, we wait until later to get the other ticket, thus almost missing the train.

And the train. 5 coaches (inc 2 first class). No seats. Thank you East Midland Trains, so we stand all the way to Bedford. At least it's quick and funnily enough when the inspector checks our tickets and passes, they are correct.

We have enough time for a game of darts in a town centre pub and a visit to the surprisingly spacious Wetherspoons. And then onto Esquires where we are puzzled by the fact that the Quireboys are not in the room we saw them previously. Instead, they are upstairs and in a larger hall. And it's pretty busy. Still, we got to the bar and got a half decent spot. The electric show was really good, Spike and the band on good form and (relatively) sober. The crowd were not. I had the best part of 2 full beers spilt over the lower half of me (to be fair, the culprits were very apologetic). Despite that, the gig was enjoyable.

We knew that the downside of being 55 miles from home was that we'd probably have to miss the encore to get the last train. We'd double checked the last one (23:27) with the (more helpful) lady at the Bedford Ticket office. Technology these days means that you can check the running before you leave. 15 minutes before the encore it was "on time". 5 minutes before "delayed" with an eta 33 mins later. There was also a previously undocumented Thameslink "chugger" at 23:40 which was not on the ticket office list. 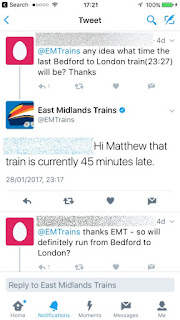 We stayed for the encore whilst tweeting EMT to see if the train would actually run. We were told it would, but now it would be 45 mins late. Previous experience suggests that when things are that late (and still not moving) they often turn to "cancelled"! So a quick dash for the "chugger" and a slow "all stations" trip back to St Pancras (we got in 2 mins after the late arrival as it turns out, but at least had several seats and toilet facilities!).

And on to St Pancras. London has recently added a "night tube" on the Victoria and Northern lines for Friday and Saturday Nights. So there is no excuse at an International Station for the entrances to all tubes to be boarded up. As relative locals we were able to guess that the entrances in nearby Kings Cross may be open (they were), but why on earth no signs telling the people with suitcases trying to navigate around St Pancras that? Tube was efficient, but very busy on the Northern Line from Stockwell. 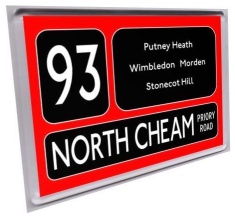 I say goodbye to Richard at Morden and wait for a 93 bus. the Countdown board says "18 minutes" - grrr. 25 minutes later it says "16 minutes". FFS! The bus eventually arrives 45 minutes later after the World's most frequent night bus (the N155) had arrived 6 times!

I had thought when I saw the 18 minutes not moving that an "Uber" cab was a good option (£7.50 and 3 mins away), but as my phone was down to 1% battery I had no confidence that it would stay on long enough to confirm the booking, identify the cab or be called by the driver.

So, eventually I get in at 2:45 am - three and a quarter hours to travel 55 miles. That's the price for "Keeping Rock And Roll Alive". Welcome to transport in Britain folks! 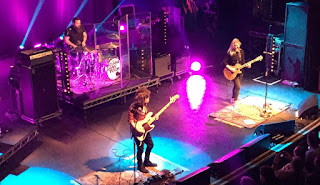 My first show of 2017 and it's on the first floor of the Shepherds Bush Empire for Joanne Shaw Taylor. For reasons I'm not quite certain of the Empire nearly always make the first floor unreserved which means you have to get there early for a seat or a standing view from the side above the floor. We opted for the latter, which meant getting a decent view of the support band - who's name I have instantly forgotten. Shame as they were actually pretty good.

JST and her minimalist backing band appeared - good to see the old tradition of Guitarist and Bass play standing on rugs being kept (!) and it was a really high quality show. Mainly showcasing the excellent "Wild" album, the vocals were clear and the playing of the highest order. Joanne goes from strength to strength and my guess is the next time she plays here the upper tiers will be open.

Setlist
Dyin' to Know
Nothing to Lose
No Reason to Stay
Jump That Train
Diamonds in the Dirt
Tried, Tested & True
Watch 'em Burn
Time Has Come
Wanna Be My Lover
Ready to Roll
Wild Is the Wind
Tied & Bound
+
Going Home

An enthusiastic (and more thorough) review of the show is here