Back to back gigs and off to Fulham for a couple of beers and a gig. Some nice German Pilsner in the Octoberfest Pub was followed by and outrageous £4.60 for a pint of Pilsner Urquell in the "Fulham Mitre" - that cannot be justified!

The Wheatsheaf had Estrella on draft - very nice and a comparative bargain (yeah, right) at £4. Luckily, the gig was free and Jackie and his band romped through 3 sets over a 2.5 hour period, playing their normal mix of rock and roll covers, blues, originals (Rock and Roll Whiskey Blues) and some old favourites (Rockin All Over The World / Caroline / Again and Again). Loved Jackie's comment during the Again and Again snippet - "I wrote this one.....").

Still not too sure why they were so far from "home turf" in Mid-Surrey, but a nice evening in a decent pub with good music. Rather scary that it's nearly 24 years since I first saw him in the Kings Head in Putney!
Posted by MatthewB2 at 2:43 pm No comments:

Many years ago, long before inflicting his 5 "Great American Songbook" albums on the World, Mr Rod Stewart was one of the foremost Rock and Pop vocalists in the World. Post Faces, his 70's albums are rightfully noted for containing some classic material. Amongst the people who helped write and played on this material in both studio and on stage were Jim Cregan and Gary Grainger.

Jim and Gary have formed "Apart From Rod" to showcase much of this classic material, joined by another couple of recognisable names - Robert Hart on Vocals (Ex Bad Company), Harry James on Drums (ex Thunder and currently Magnum), Pat Davey on Bass(ex Tom Robinson Band) and Keyboard wizard, Sam Tanner.

So lots of people we've seen before seprately and know are good. Unfortuately Gary Grainger wasn't available, but we were treated to another member of the Rod Stewart Band, Robin Le Mesurier stepping in at the last minute who was an excellent substitute.
There's no doubting the bands ability and in Robert Hart, they are lucky to have one of rock's finest vocalists (amazing that Bad Company ended up with 2 so good - with Paul Rodgers obviously the other). A great evening of 70's classics followed - with a few anocdotes thrown in, highlights being Cregan's solo in "I Was Only Joking", the Piano on Twisting The Night Away, You're In My Heart and a stomping "Stay With Me" (with Val from Bad Influence on additional vocals). I'll even forgive (just!) the inclusion of a drum solo (as it was Harry) and the amazing fact that Robert Hart didn't know the words to "Sailing".
A really good night out - will certainly look to see them again.
Posted by MatthewB2 at 2:42 pm No comments: 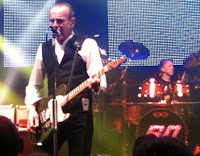 More Quo - this time in Croydon. Excellent seats (4th row, central) and another good show. A couple of changes from Southend, most noticably replacing "Junior's Wailing" with the excellent "Don't Waste My Time" for the encore. Much, much better than last year at the same venue!
Posted by MatthewB2 at 1:46 pm No comments:

After a short wander around Shepherds Bush, it was off to the Empire for my first show there for quite a while. Whilst not too busy when we arrived, come showtime the standing area was absolutely packed! Now I don't know much stuff by Cheap Trick - being here only by virtue of enjoying their support slot with Def leppard a few years back, but this was a really good show. In fact, probably the best headline show I've seen by an act whose material I don't really know!

Setlist below is from setlist.fm and I'm ashamed to admit, I didn't notice at the time the presence of a Wizzard cover in the encore!

Setlist
Oh, Candy
Speak Now or Forever Hold Your Peace
Stiff Competition
Best Friend
Lookout
Tonight It's You
I Want You To Want Me
I Know What I Want
These Days
Wrong All Along
Smile
Anytime
Magical Mystery Tour
Cold Turkey
Sick Man of Europe
Closer, The Ballad of Burt and Linda
Surrender
+
Ain't That A Shame
Rock 'n' Roll Tonight
Dream Police
Posted by MatthewB2 at 1:42 pm No comments: 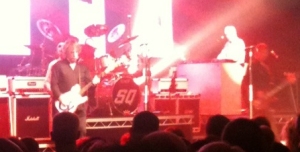 The first night of the new "Quid Pro Quo" tour and it's off to "Sauffffend" in Essex. Past experience has shown it's better to go to the first show of the tour as you're more likely to hear some new material. Often the band will then decide it "doesn't fit" or "doesn't flow right" and go back to the same old set a night or 2 later.

A fastish train to Southend Central gave us a bit of time to explore a couple of hostelries - most were pretty much dead until we got the "Alex" who were IDing people on the door. I managed to blag my way in (maybe I look over 21?) and we found out why it was so popular - £1 for a bottle of Becks, £1.50 a pint of Stella - should have got their earlier! We also had a quick game of pool on possibily the worst table I can remember in the pub outside Westcliff station.

Onto the gig and in just in time for the opener - predictably "Caroline". Third song in was a nice surprise - the return of "Break The Rules". Best bits of the evening were the 2 previously unplayed songs - "Spinning Wheel Blues" in a medley and a full version of "For You" - 2 songs I never thought I'd hear live. Ricks vocals were better than I've heared for a while and Francis was on good form with his playing and banter. Even though in an ideal world there would have been a few more set changes, all in all a very enjoyable show.

Setlist
Caroline
Something 'Bout You Baby I Like
Break The Rules
Mean Girl
Softer Ride
4500 Times
Rain
Beginning Of The End
Medley: Mystery Song / Railroad / Spinning Wheel Blues / Wild Side Of Life / Rollin' Home / Again & Again / Slow Train
The Oriental
Creepin' Up On You
For You
In The Army Now
"Killer" - Drum Solo
Paper Plane
Roll Over Lay Down
Down Down
Whatever You Want
Rockin' All Over The World
+
Junior's Wailing
Rock & Roll Music / Bye Bye Johnny 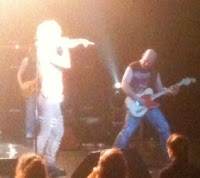 I wasn't sure whether to include this in the Blog - after all it's a theatre show rather than a gig as such. That said, it's all music and when we booked up we were expecting Harry from Thunder to be on drums. A shame then that some sort of contractual dispute meant all the band members were changed without explanation at the last minute!

We started in the Wetherspoons in Epsom (and were the oldest people there by some margin). We were then pleasantly surprised to find a nice bar in the theatre - and drinks were allowed in the venue. Just as well!

So, the show? H'mmm. Well it was certainly "entertaining" - if not always for the right reasons. The band was acceptable, the 3 vocalists (sharing mic duties) were OK - in fact "Wardi" (from Oliver/Dawson Saxon) was good - and I saw him years ago in Shy! However, what made us keep laughing out loud was how the other 2 clearly didn't know the words for most of the rock classics they were singing. Despite referring to song sheets on the stage and cries like "Everybody knows this one...", they clearly didn't! If they can't get the right words to "Summer of '69" or "Hammer To Fall" or even standard Bon Jovi stuff, then why play them?