An electric evening of the Quireboys in Islington was preceded by darts of an amazingly good standard in The Carpenters Arms (Kings Cross) beforehand. We'd managed to skip the first 2 bands on the bill, but were too early to avoid the 3rd, meaning a trip to the Mezzanine level bar to rest our legs for a bit. I don't quite see the point of these multi-band bills. Stick to one support - it is plenty!

Back downstairs and you know what you are going to get with the Quireboys - good time Rock & Roll and a great set. The extended bill meant a shorter set than normal, but this was still value for money in my book. Let's hope the recent increased activity of the band continues for a while yet. 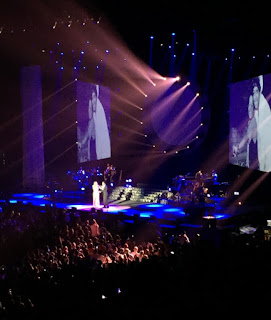 From one American musical legend to another as Mariah Carey and entourage descend on London's O2 arena for the first time in 13 or so years. A fashionable 30 minutes late, the compact set consisted of a mix of ballads and more uptempo numbers - but nothing too new. It began with Mariah (who had apparently taken the river bus to get here) being carried on by her male dancers. From the (very expensive) seats we had about half way back in the Arena, Mariah's vocals were too low in the mix and the decision to have no live screens in an arena this size was inexcusable.

Better was Mimi's decision to interact with the crowd - including a couple of "British" accents and the costume changes were much less frequent than expected. However, good as singer Trey Lorenz was (and the backing singers) - it was Mariah we had paid to see and so, something was definitely lacking. This was most apparent in a seemingly rushed mid-set medley which was almost over before it began.

The show was saved for me by the ballads section, where we finally got to hear that voice. Describing Phil Collins as an inspiration before "Against All Odds (Take A Look At Me Now)" and her song Hero as "schmaltzy", the last 4 or 5 songs were fantastic. I would have loved to have heard "Vision of Love" or "Dreamlover", but maybe I'll have to save my pennies for a return to Las Vegas for that.

All in all, an enjoyable show, but one that could have offered a little bit more. 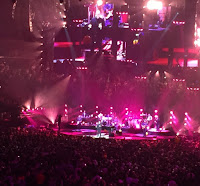 A relatively short notice work trip to New York means 2 things from a musical point of view. Firstly, I have to miss T'Pau at Farncombe this week. That disappointment is compensated by the fact I can see a musical hero - Billy Joel - at the Garden. Billy is playing a residency of one show a month at the World famous venue, and this is show 27. It may cost an arm and a leg (well over £100 in UK money), but is not to be missed. The 2 hour show varies slightly each month and there are different guests show up. In terms of setlist, I think we did pretty well for this one - the only low point for me being the audience vote between 2 of Billy's songs I really have no time for (the insufferable "Zanzibar" beating the marginally less dreadful "Big Man on Mulberry Street). I refused to cheer for either! Still - don't think that I'm ungrateful - the rest was fantastic (well maybe excluding "Big Shot" - another personal non-favourite!).

Billy's voice was great (better than expected) and the songs performed with passion from the fantastic band. Billy's between song comments (e.g. The Entertainer dedicated to Donald Trump) and musical interludes (many around the upcoming St Patrick Day) were all good fun and added to the occasion as did the appearance of violinist Itzhak Perlman. A Hard Days Night was dedicated to the recently deceased George Martin

Can't wait for September in the UK.

Setlist
Miami 2017 (Seen the Lights Go Out on Broadway)
My Life
The Entertainer
Vienna
Zanzibar
Movin' Out (Anthony's Song)
New York State of Mind
The Downeaster Alexa [with Itzhak Perlman]
Where's the Orchestra? [with Itzhak Perlman]
Allentown
All About Soul
Sometimes a Fantasy
She's Always a Woman
Don't Ask Me Why
We Didn't Start the Fire [with Itzhak Perlman]
The River of Dreams / A Hard Days Night
Scenes From an Italian Restaurant
Piano Man
+
Uptown Girl
It's Still Rock and Roll To Me / Be Bop-a-Lula
Big Shot
You May Be Right / Rock and Roll
Only The Good Die Young

So, it turns out Tufnell Park is a cheap place to meet for a pre-gig drink at the Forum. £2 a pint in the Boston Arms, although to be fair you are highly unlikely to list this as one of your favourite pubs. Opposite, the slightly more upmarket "Aces & Eights" has Moretti at well below "City" prices and best-of-the-bunch "The Pineapple" had a delightful German Pilsner for well below £4 a pint.

But there wasn't too much time for merriment. German (and associated European) rockers Avantasia had promised a lengthy 3 hour set. I didn't quite know how to take this as a) I have none of their records and b) I know none of their songs. 3 hours of unfamiliar music can test even the most patient of casual fans and basically if it hadn't been for Magnum's Bob Catley being in the number of guest vocalists due to appear then we probably would not have been here.

I gather Avantasia are reasonably popular on the continent, playing to much larger venues than here tonight. Still, it was a slight surprise to find the Forum so crowded with no obvious way through to the lower floor section. Therefore, our evening was spent on the first tier to the right, at bar level. And what do you know? It was a really good night. The music held my attention and the set felt less than the 2hrs 45 or so it actually took and the evening did not drag at all. Bob was on great vocal form as were the guests which include the singer from Mr Big - Eric Martin. I had feared it all may be a bit "prog" or the concept may take over from musical quality. Instead the charismatic Tobias Sammet has produced a decent band with a range of decent music. I still don't know the songs (although "The Story Ain't Over" was instantly catchy) - and to be fair am unlikely to invest in the back catalogue, but this was a shot in the dark well worth taking.