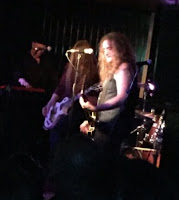 Toby Jepson - ex front man of the "Little Angels" has a new band and they are playing a sold out show at the Islington Academy 2 (the small 250 standing only venue upstairs). I don't know any of the material, but I like Toby, so it seemed too good to miss.

We were slightly late arriving and the band had just come on, meaning we could barely get through the door. Our "normal spot" (front and left) was out of the question, but with a few friendly smiles, managed to squeeze to the far right of the venue near the emergency exit and a partial view of the stage without blocking anyone else.

The band were very good and it was one of those shows where it didn't matter that I didn't know the new songs. I did enjoy the snippets of Blondie's "Union City Blue" and a very short end part of "Bohemian Rhapsody" too. The Wayward Sons have been getting rave reviews in the music press and so I'm sure they'll be playing bigger venues sometime soon. Predictably, a couple of Little Angels covers went down very well and I'm glad things are looking up for Toby.

A choice of 2 local Quo tribute bands this evening. John Coghlan's Quo were at the Hhalf Moon in Putney or "State of Quo" in Sutton. Partly due to an early start on Saturday to go to France, I opted for the most local option without the former Status Quo drummer.

The venue was busier that I expected and the band were decent. The instrumentation was spot on and a varied setlist should have catered for all tastes. As the lead singer stated, they "don't come down south very often", but hopefully they will again soon as I will certainly be returning.

The second Rhino's Revenge show of the year and it's quite a different set from their support slot warm up show. It's also much busier in the Half Moon. The band are in playful mood and Freddie Edwards joins the 3 piece "for one night only".

A selection of material across both Rino's Revenge albums is punctuated with the normal array of Quo obscurities. The 2 non-Quo covers (Bob Seger & Steppenwolf) were excellent and somehow I won the bet with Richard on "Born To Be Wild" as a random cover that could be played. Where in my subconcious that had come from, I have no idea!

The evening was also notable for visting a few new places in Putney. Revolution has now taken over the Wetherspoons by the station, the Lost & Co bar had Paulaner on draft in their happy hour and the Boma Bridge had a nice "Tunnel Bar" heading off toward the Thames.