Having seen Mr Ralphs on numerous occassions in various guise, this is the first time I'd seen him as a headline act in his own right. The fact that he'd be playing no Bad Company or Mott The Hoople Material in his own set was offset by the choice of support band - "Free & Co" - guess what they played !!! -;)

I got my first "2 pointer" of the evening by recognising drummer Phil Martini in their lineup - last seen (by us) in The Quireboys and The Union.

Mick and his excellent blues band then played a competant set. In fact that's doing a dis-service. For a set where we basically knew nothing but 1 or 2 snippets of songs, it was actually really good. I was also surprised that no songs appeared to feature the words "I Woke Up This Monring" !!). Later, I gained further "spotting points" by seeing Photographer Ross Halfin (working), Tracy Hunter (at the bar), Kurt Brandon (also at the bar) and rumours of a sighting of Jimmy Page (upstairs). Well worth the trip.

Setlist
Rock Me Baby
Hi-Heel Sneakers
Just a Little Bit
Next Time You See Me
Blow Blues
Mr. Charlie
Hide Away
It Hurts Me Too
Help Me
Further On Up the Road
Got My Mojo Working
Mamma Talk To Your Daughter
Posted by MatthewB2 at 2:48 pm 1 comment:

This was officially billed as the "Freedie Mercury Tribute", marking 20 years since the sad death of the legendary Queen frontman. That makes it 10 years since an excellent tribute show at the Hackney Ocean which featured Messrs May and Taylor plus guests like Bruce Dickinson with the SAS band.

Internet Forums were awash with comment that May and Taylor "couldn't be bothered" to turn up for this one, so it was a pleasant surprise when Brian May strolled onstage during Kerry Ellis's take on "No One But You (Only The Good Die Young)". This was followed by "Somebody To Love" and an impressive "Tie Your Mother Down" before he departed (turns out he was off to guest at The Darkness's show up the road in Hammersmith - where he also played "Tie Your Mother Down" amongst others!).

Still, as always, the band was held together by the SAS band  Spike Edney and Friends. A string of fairly low key guests - Madeline Bell, Chris Thompson, The Fabba Girls, Patti Russo & Tony Vincent - injected mch fun into the evening. In fairness, it didn't compete with the event 10 years ago, but that didn't prevent it from being a fun night out with the chance to hear sme great songs.

Who's Who - Friday 18th November - Half Moon, Putney 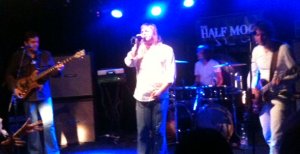 A nice Friday evening trip to Putney to see the UK's premier Who tribute band (alongside "The Mods" of course!). The Half Moon is being refurbished, so it looked a bit strange with the bar closed, but the venue open. A mid sized, enthusiastic crowd were treated to nearly a couple of hours of Who classics with the band returning for an unexpected encore after it looked like they were done and dusted. The Half Moon appears to be the only London venue they play these days which is a bit of a shame, but if you are a fan of the Who and get the chance to see these guys then I suggest you do.
Posted by MatthewB2 at 2:25 pm No comments:

Labels: Half Moon, Putney, review, Who's Who 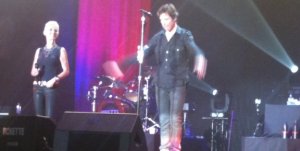 So, 17 years after their last Wembley appearance, the promoter books Swedish stars Roxette at Wembley Arena for the same evening as England v Sweden at Wembley Stadium. Genius! Thankfully, the smallish football crowd didn't hamper our journey to a pretty much sold-out gig too much.

Support was provided by Darren Hayes from Savage Garden - not my cup of tea, so after a cursory glance to acknowledge another "Chart Act", it was off to the bar!

Taking our seats about 18 rows back from the front, it was apparent that many people had travelled long distances to be at the show. If was also clear that Roxette attract a very diverse audience. At least everyone had grown up from the "teeny-bop" crowd from 2004 !!

The show itself was excellent - the set not wildly different from the Per Gessle solo shows also detailed on this blog. As expected, most of the backing band were the same as from that show, although  obviously Marie Fredrikson adds a great deal vocally and with a striking iconic image.

One of the highlights for me was a heavy electric version of the National Anthem as the guitarist was introduced  - last heard in this form by me at the same venue by a certain Mr P Townshend in 1989 !

Rumours are for another London show next year - venue and cost permitting, that would be fine by me.

Setlist
Dressed For Success
Sleeping In My Car
The Big L.
Wish I Could Fly
Only When I Dream
She’s Got Nothing On (But The Radio)
Perfect Day
Things Will Never Be The Same
It Must Have Been Love
Opportunity Nox
7twenty7
Fading Like A Flower (Every Time You Leave)
Crash! Boom! Bang!
How Do You Do!
Dangerous
Band presentation + God Save The Queen
Joyride
+
Watercolours in the rain
Spending My Time
The Look
+
Listen To Your Heart
Church Of Your Heart
Posted by MatthewB2 at 2:55 pm No comments: