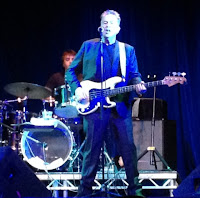 A busy October comes to an end with another new venue for me (and indeed new town) - and a Thameslink trek across town to the Harpenden Public Halls.

I had been impressed with Mr Robinson a month or 2 back and with Mrs B keen to see him too, this was the only accessible show for us on the rest of the tour.

The show was in a different show to the new album showcase in London. It was still in two halves, but followed a more traditional mix of hits interspersed with new material.

Again it was really enjoyable. The view was good, with a very high stage and sound quality excellent. Tom's personality comes across really well with the in-between song stories and the musicianship was, once again, of high standard. There was even an improvised "Grey Cortina" in response to an audience request, which possibly wasn't on the original setlist. Sadly, we had to leave at the end of "2-4-6-8 Motorway" to get the train and missed the "surprise" encore, but again a fun evening was had in what looks to be a nice town. I shall return.

Setlist
The Winter of '79
Too Good to Be True
Cry Out
Never Get Old
Martin
Up Against the Wall
Merciful God
War Baby
+
Meet Me Half Way [Duet with Lee Forsyth-Griffiths]
Home In The Morning
Don't Jump, Don't Fall
Atmospherics: Listen to the Radio
Glad to Be Gay
Risky Business
The Mighty Sword Of Justice
Grey Cortina
2-4-6-8 Motorway
+
Power in the Darkness
Only The Now 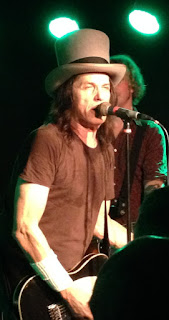 A new venue for me - the Railway Inn in Winchester. Earlier in the day we'd had a wander around the Cathedral town and despite the rainy weather found it very pleasant. Highlight was "The Black Boy" pub where we had our first ever game (in 30 years of pub going!) of "Ringing The Bull". See links below.

The venue at the Railway Inn was smaller than I'd expected - I guess it holds around 125 when full? There we around 90 tonight (including some familiar faces from London shows) and it was bl**dy loud! Indeed my ears were still ringing well into Friday, but then again we were very near to Warner's speakers.

Dan and the boys never play a dud show, but this one had less in the 2 hour setlist for me than previous years. That is not a complaint - I love the way the band mix up the set tour after tour and even show after show. What was interesting was the lack of covers thrown into the middle of other songs - for instance this must be the first version of "Sheila" without a break into anything else that I've heard since about 1990! That said, maybe that is the norm for shows outside of London?

"I Love You Period" and "Mon Cherie" saw the audience in fine voice - but I'm now wishing I'd written the setlist down. Anyone out there have it please?

I'll have to pick up my merchandise (new CD and Vinyl) at next week's London show due to a quick dash for the fast London-bound train. A good day.

http://www.mastersgames.com/rules/ringing-bull-rules.htm
http://www.theblackboypub.com/
[of 15 throws, score is MB 1, RB 2 - seems we need 21 to make a game] 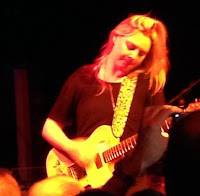 Monday evening is never the best for gigs, but an evening with Joanne Shaw Taylor makes for a worthwhile trip to Camden and the Jazz Cafe for an evening of blues. The venue had reliable stage times (Brooklyn Bowl take note!) and we were in place in the back corner of the sold out venue 10 minutes before showtime. And what a good show it was. Joanne's playing was excellent and ably supported by the excellent 2 other members of the three-piece. Slightly unnervingly, 2 people collapsed quite close to us half way through - we think because of the very hot temperature (the air conditioning was turned on shortly afterwards). The young Jazz Cafe staff did a really good job of treating those affected, getting them water and helping them outside - thankfully just about back on their feet. Obviously hope they were OK.

The music came from a selection of JST's back catalogue - the more recent influenced by a recent boyfriend in slightly disparaging terms. As I said, the soloing in particular was great and I'm sure appreciated by the decidedly middle aged crowd. The one thing I would add is that I can't remember any other act I've seen where no-one sings along to any of the songs - I think the emphasis is on the guitar and maybe the lyrics get lost somewhat in the music. A bonus "Ling-alert" point (you'll have to read earlier blogs to see what that is about!) and a good evening was completed by use of the gents in a nearby hostelry followed by a frame of pool against a patron who could barely speak or stand up (I won). Didn't stay long enough to find out if I was being hustled.

So, the main reason for booking for this show was the presence of Rhino's Revenge as main support (ie 2nd of 3 acts). A check beforehand on stage time claimed doors at 7pm and music at 8pm. When we arrived at the venue at just after 8:15 therefore, it would not have been unreasonable to expect to catch the first act, mid-set. However, much to our frustration, we caught the second to last song of Rhino's set! Apparently, he had come on around 7:20! No indication of whether the first act had bailed out, but if a venue is going to publish stage times, they should at least be close to correct! Very frustrating, especially as the band seemed on good form, judging by their "Bad News" finale. We will have to revisit the Edwards clan in February next year instead.

Hayseed Dixie are a southern US group who specialise in "bluegrass" versions of rock classics - think AC/DC, Bon Jovi, Journey etc with acoustic guitars and banjos. The singer seems to have a good stage presence and was entertaining as was the impromptu version of "name that tune" we played with each intro. Good fun and lapped up by the audience. Not sure I'd go to see them again on their own - the "joke" may wear a bit thin (and that is not being disparaging to their musical ability, which was excellent), but as a package with another band I wanted to see, I certainly might. 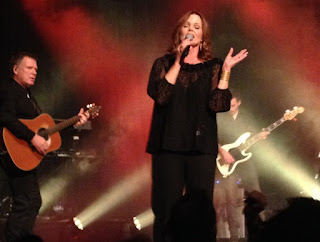 More Belinda Carlisle, this time at the Indigo2 in London. Decent 4th row seats acquired meant no need to be in the venue especially early, meaning time for a nice meal at the Prospect of Whitby in Wapping and a quick drink in the "rooftop" bar of a restaurant in front of the O2.

As at Brighton, Belinda's audience was mixed - with a predominantly middle aged crowd mixed with some fabulous campness!

She was once again on great form - although it is a shame that the setlist was shorter than many of the recent US shows. "Mad About You" was included which was a highlight and there was much singing throughout from the audience - apart from maybe during "Bonnie & Clyde" which was possibly the only lull in proceedings. 2 really enjoyable shows from the former Go Go's star - let's hope there are more on the horizon. Rumours of some shows with Susanna Hoffs - now that would be great! 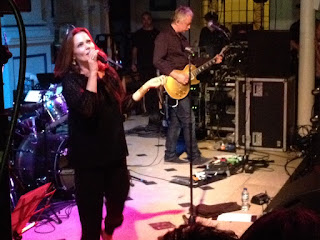 A new venue for me. It's good to see some working churches being put to addition use within their community and this looked a very pleasant venue whilst the support was on. However, the problem with a non-purpose built venue became apparent as soon as Belinda hit the stage and the audience stood up. She is not exactly a tall lady (particular in the flat shoes she wears for shows) and the "stage" was less than a foot tall. The result meant that no-one beyond the front 5 rows could see a thing. I was half way back and at 6ft 3" could only get a flash of reddish hair occasionally. Everyone was in the same position and so we all did what a typical middle-aged British crowd would do - moved ourselves to somewhere we could see - ie down the front.

The security didn't quite know what to do. On one hand people refused to go back to their seats and one the other, there was absolutely no risk to Belinda or the band. A happy truce was reached where security just tried to keep the aisles clear - with mixed results.

Once we were able to see, the show was great. Belinda looked and sound fabulous and the setlist was full of hits. One other slight disappointment was that whilst she did play one encore, she didn't reappear for the scheduled second one printed on the setlist. I am seeing her again next week in London and really looking forward to it.

Having not been to the Kingston nightspot for years, I'm now back for the 2nd time in 2 weeks. This being Freshers Week, I'm even more out of kilter with the average age - strangely no proof of ID for me on the way in.

Still, regular readers will know that I'm a fan of London popsters Scouting For Girls and this show followed a brief acoustic set at Banquet Records which unfortunately I couldn't make.

The venue was quieter than I'd expected, but filled a little by the time the boys came on stage around 10:40. A brief 50 minute set was a pleasant mixture of songs from the soon to be released new CD (included in the bargain £10 entrance fee) and some old classics, including "Elvis Ain't Dead", "Posh Girls" (Ray Stride informs audience member that is is "technically impossible" to be from Portsmouth and be posh) and, of course, "She's So Lovely". Sadly no "James Bond", but the audience gave a brief version themselves as the band left the stage. Great value and a good night as always.