After a brave decision to meet in one of the errr.. most traditional pubs in London - The Stewart Arms (a mere stones throw from the Westfield Shopping centre) - average age of clientale 60+, we moved for a nice couple of Bitburgers in the The Bull - once of the nicest shopping centre pubs I know.
Having ascertained stage times and decided to give the support a miss, we turnd up at about 8:50pm for the 9:00pm start. This is where the problems started. 2 of us had remembered our tickets and 2 hadn't! (guess who the gig regulars are!). Anyway, this meant I had to go into "dad" mode, explaining to the nice girl in the ticket office what fools my friends were (...insert your own Australian abuse here...) and she very kindly did some checks and issued 2 passes. Beyond the call of duty, so thank you Shepherd's Bush Empire (and apologies to those in the queue behind picking up tickets).

So, we missed the first 2 songs, but the venue wasn';t sold out, so got a reasonable view in our normal spot by the left hand bar. Double beers were promptly supplied by he who forgot the tickets and we enjoyed the rest of the show. I found it a bit wierd as I know much more Jimmy Barnes solo material than Cold Chisel, but it all seemed well received by the predominently Aussie crowd. Ian Moss sang vocals on some tracks - he's certainly a bit less "shouty" than Mr Barnes, but Jimmy seems to get the better songs. Khe Sanh was a predictible highlight.

Anyway, after the show we decamped to the Walkabout (groan...) for a pint of Snakebite (double groan...). They at least had the decency to close at 11 (why?), so if was on to O'Neills for a nightcap of a lager variety. The normal bus combination home worked well, so a 1:30am bedtime could have been much worse.
Setlist:

Standing on the Outside
Cheap Wine
No Plans
HQ 454 Monroe
Saturday Night
Everybody
Forever Now
Yakuza Girls
My Baby
Rising Sun
Summer Moon
All For You
You Got Nothing I Want
Merry Go Round
Flame trees
Khe Sanh
Bow River
+
When The War Is Over
Four Walls
Goodbye (Astrid Goodbye)
Posted by MatthewB2 at 1:35 pm 1 comment: 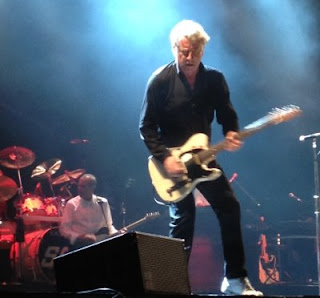 You know what you are going to get from a Quo Summer ""festival". A slightly shortened version of last years set, a great night out and rain!

Somehow, only the support band - the Straits - got the the rain. Pretty heavy it was at times too. They were pretty good (it's all Dire Straits covers), but a little self indulgent in places. They may well have done Money for Nothing and Walk of Life before we arrived, but it would have been nice to have heard those.

A solid set as always with Francis on good form moaning about noise restrictions and overhead planes on a regular basis. A solid 8/10 from the boys.
Posted by MatthewB2 at 11:18 pm No comments: