"And I like it, I like it, I like It, I like it, I la la la like it..." etc. John Fogerty is probably best known in the UK for being the writer of "Rockin' All Over The World", but in the rest of the World, he is known as the voice of Creedence Clearwater Revival. In this, his first British show in living memory, he ran through a near-perfect setlist (except for the absent "Almost Saturday Night") with great enthusiasm and a boysterous crowd (sporting, bizarrely an array of T Shirts including AC/DC and Pearl Jam) of all ages.

An excellent band, including Billy Burnett (last spotted with Fleetwood Mac) backed up an energetic performance from Mr Fogerty (who must be at least in his late 50's). Recommended!

PS if you got there late expecting to miss the support - there wasn't any! He came on at 8:10 and you could have easily missed half the show due to poor ticket information.
Posted by MatthewB2 at 5:23 pm No comments:

Damn! A day after we got tickets for this, the Who announced a warm-up at the Brighton Centre. Bit of a dilema, but we'd paid for these tickets, I've not seen a full Def Leppard show before and I've seen the Who lots of times (and am going next month). So did we make the right choice?

Having discovered that OSP (bar in Fulham Palace Road) have outrageously stopped doing draft Budwar (orders from the brewery!), we got in fairly early and saw the main support, Cheap Trick. They were good fun - the guitarist changed his guitar after EVERY song (!) and it was suprising how many of the songs were recognisable. I may well be tempted to see them on their own.

Got down to the front for Def Leppard, a coupld of yeards back from the barrier, left-speaker. They opened with "Hellraiser" and continued with a reasonable setlist. unfortunately, bar "Hanging On The Telephone" (which I liked, and the rest of the audience seemed not to), the covers they chose of their latest album ("Yeah!") were the weaker ones IMHO. The fairly brief set concluded with the expected hits, Rocket, Animal, Pour Some Sugar etc, but for me there was something lacking. It was all very professional and well played (although Joe's voice sounded a bit ropey in places), but there was a gernal lack of spark or excitement. All in all, not bad, but given the same choice next time, I'm off to the Who!
Posted by MatthewB2 at 5:18 pm No comments: 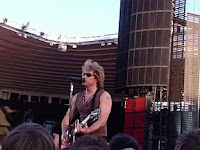 My first gig at St. Mary's having been there a number of times for football. Arrived just in time to catch the end of Nickelback who sounded OK. Our seats at the side provided a good view, albeit quite a way from the stage. Sound quality was suprisingly good and the show was a sell-out.

We got a good 2 hrs 20 from BJ and most enjoyable it was too. No matter what the rumours about JBJ's perceived obnoxiousness from some quarters, the guy does know how to put on a show and interact with the crowd. For me, "Runaway" was a highlight, especially as it was unexpected. Good stuff - indoors next time though please John!
Posted by MatthewB2 at 5:16 pm 1 comment:

I've seen the Lightning Seeds a couple of times. The first, around 10 years ago, they were excellent. The last, at the Hammersmith Palais 6-7 years ago, they were truely awful - they played hardly anything I knew, sound quality was poor and the audience was bored. Tonight, I'm glad to say was closer to the first show. Supporting a new compliation, this was a collection of greatest hits and a few favourites thrown in, lapped up by a smallish crowd. 2 observations;- The female guitarist should lighten up a bit. You're in a band woman, playing to lots of people enjoying your music - a smile once in a blue moon wouldn't go amiss - enjoy it! Secondly, how many of the songs do sound very similar. I guess you could say that Mr Brodie has created a "sound" of his own.

So all in all, an enjoyable show - bit on the short side though at only just around an hour and ten minutes, but couldn't think of anything obvious they missed out (shame no "Likely Lads Theme" though!). Now, dare I risk it if they come 'round again?
Posted by MatthewB2 at 5:15 pm No comments: