An unusual one this. An unprecedented trip to Streatham for a show in aid of a local cats charity and a children's charity. A lengthy "all day" event, we decided to get there a bit later to concentrate on the 3 headline acts.

First, a quick check out of the pubs Streatham High Street had to offer. Most were absolutely fine (despite a £5 pint, yep really, of Moretti in our first stop). Gastropub prices gone mad! The backstreet option we found was a little more wierd. I can only assume the "all-day bender" is alive and well in some parts of town!

Into the White Lion, which is a decent enough old fashioned pub with the gig suprisingly in the front area overlooked by massive windows. By no means full, but a healthy enough crowd was in by the time we turned up, checked our names were on the list (always nice when they are!) and handed over our catfood donation!

Our first act was Brijitte West who I'd never heard of, doing an acoustic set. Turns out she is the singer from NY Loose and was really good. Despite not knowing any of the songs, her half hour set flew by. After quite a long gap, the band we'd really come for, The Peckham Cowboys, were on. Featuring ex-Quireboy Guy Bailey on guitar, this is not a photogenic band! That matters not, when they play some good quality bar room blues and rock though. A solid show, but only about 25 mins worth which was a shame. Hopefully they'll do some of their own shows soon.

Headline act was Tyla from Dogs D'Amour. For me, this was the surprise of the evening. In his 90 minute acoustic set, I didn't know any of the songs (unfortunately no "Satellite Kid"!), but it was enthralling. A mixture of soft heartfelt ballards and some punchy rock numbers all played expertly whilst sipping on various drinks (Guiness, Red Wine etc) between songs. As Richard and I left, we commented how that will be tough to beat as the value gig of the year!
Posted by MatthewB2 at 11:58 pm No comments:

﻿﻿
﻿
Our annual pilgramage to the Royal Albert Hall in support of the Teenage Cancer Trust Charity. Their excellent work is supported by a series of gigs each year arranged by Roger Daltrey. Much as we'd liked to have gone to see Paul McCartney a few days later, the prices were a bit out of reach, so instead we went for the opening night to see Roger himself, albeit from slightly long range in the circle! there had been much press debate leading up to the show around debenture holders flogging their seats for huge profits and although there were some retricted view seats left empty, it was a pretty good turnout for the Who frontman and "friends".﻿
﻿﻿﻿
﻿﻿﻿ A 2 song acoustic set from Mr Daltrey started proceedings (pretty average in my opinion), including "Freedom" before the first of the "special" guests appeared - Paul Freeman who did 1 song. A brief (early!) interlude was followed by Kelly Jones from the Stereophonics, who I really enjoyed. One highlight was Ron Wood joining him for an excellent Faces "Ooh La La" - outrageously predicted by me at the start of the evening!

Another break and then it was time for Paul Weller. By many accounts, his live performances can be a bit hit or miss, depending on what songs he chooses to play. Here, I thought the mix of well known and new was about right and his brief acoustic set was enjoyable.

Another break and it was time for the main attraction - Roger Daltrey's electric set. Without Simon Townshend on guitar for a change and with no sign of Pete either, he ripped through a range of Who classics interupted only by more guests. First up was Scottish songstress Amy MacDonald who did the 2 of the 3 songs of hers I have (!) and a popular cover of Springsteens "Born To Run". I was impressed. She was quickly followed by Steve Winwood, who's "Higher Ground" has never struck me as a classic song. I was clearly in the minority on that one as most of the crowd got to their feet for an extended version. I much preferred the next song, the Spencer Davis classic "Gimme Some Lovin'" and by then the party was in full swing. Ron Wood and Kelly Jones returned later for a slight chaotic "Baba O'Riley" after a slightly self indulgent "Young Man Blues", but there was little to complain about. Roger's traditional solo show closers bought the evening to an end. A good evening for an excellent cause.

Regular readers (if there are any!) will know that I like both of these bands. After watching Man Utd’s particularly poor display against Bilbao on TV, we trundled in to fairly busy venue and got our normal “spot” to watch the first band of this “double header”. I’m pleased to report that The Union were on top form, concentrating on the heavier elements of their 2 albums so far. It struck me for the first time about their “glam” influences, during Glitter-esq drum and bass on “Obsession” and Slade like chorus on “Black Monday” – “Hell Fire Fury, Stomping Your Feet”. Brilliant stuff.

As you know my views on the Answer sway from them being an excellent band (they are), but not quite having the songs to go with the talent. This appears partially mitigated against by their new album “Revival” which is a step up from the disappointing “Everyday Demons” in my view. Much new material was played here and it sounded good. We did laugh though at singer Cormack’s crowd surfing – he didn’t get as far as he had done in the tiny Borderline. We (somewhat unkindly!) speculated that he seems to have put on few pounds since then.

So all in all an excellent double bill. Only slight disappointment was that none of the local pubs were serving at 11pm on a Thursday – what is going on with our City?

Oh, and there was an unconfirmed "Ling Alert" !

Setlist: The Answer
New Day Rising
Under The Sky
Vida (I Want You)
Faith Gone Down
Come Follow Me
Trouble
Nowhere Freeway
Preachin'
Tornado
Too Far Gone
One More Revival
+
Evil Man
Waste Your Tears
Posted by MatthewB2 at 10:14 pm No comments: 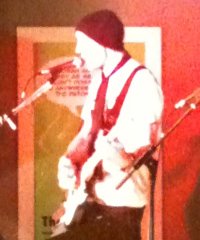 Setlist
Electric Friend
Something New
I’m The Face
Flyaway
There’s A Girl
Come Back
Making Waves
She Asked Me
Anyway She Moves
Make It
Bed of Roses
Looking Out Looking In
Still Love
Going Mobile
Stay
Forever And A Day
+
The Way It Is (Solo Acoustic)
Twenty To Eleven
The Dirty Jobs
I'm The Answer
Posted by MatthewB2 at 8:03 pm No comments: