Another family presale grab - The last night of Taylor Swift's 5 sell out nights at the impressive Staples Center in LA. I've only been here for sporting events previous, so it was good to hear such clear sound quality even from our position at the back in the gods. Free wristbands were also attached to each seat which provided a controlled light show during the show - very clever.

Support came from Vance Joy (pleasant enough) and Haim who's version of Fleetwood Mac's "Oh Well" was spot on (and very heavy!)

Taylor is promoting her "1989" global mega-album. I've got to say, I don't think it's her best work, but it mainly worked well in a live environment (I think it helped that she's been on "repeat" on the car stereo since we booked). One thing she has instigated during the tour is a run of special guests each night. I think it fair to say being the last night in LA we got the best of the bunch.

First up was Taylor's friend Selena Gomez, duetting on her recent hit, "Good For You". Later, Taylor introduced "a friend who normally only plays coffee houses - Phoebe Buffay!", which led to Lisa Kudrow duetting on the Friend's "classic" - "Smelly Cat" complete with mass audience participation!

Last up was probably a great coup as special guest - Justin Timberlake. The shrieking from the audience was deafening! The show overall was impressive. Musically I preferred the older stuff - "Mean", "Love Story" and the heavier version of "We Are Never Ever Getting Back Together". A predictable sing-a-long of "Shake It Off" bought a fab evening to a conclusion. I think Taylor is a great role model for her young fans and I think she'll be enjoying pop mega-stardom for a while yet. 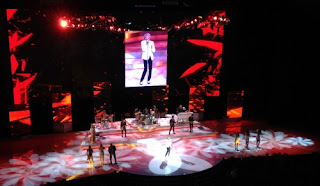 Las Vegas, Nevada and Rod Stewart is on the second from last night of his residency at Caesars Palace. It would seem rude not to see such a Rock and Roll icon in such surroundings and we had nabbed presale front row balcony seats a few months previously which seemed better value than the large scale arena prices to see Rod in the UK. Caesars must make up for this with their drinks prices - little change from $50 for 2 alcoholic and 2 soft drinks!

One of the things I like about Rod is that he does change the setlist around slightly from show to show. The slight downside of that was we got off to a slow start here. To my ears, "Infatuation" wouldn't squeeze into my top 250 Rod Stewart songs! And a song I do normally like, "Twistin' The Night Away" was a little pedestrian. Thereafter, things improved and it was a great night. You forget that Rod is just about 70, so we can forgive him for the couple of breaks he took during the show, although a lesser kind hearted soul than I could argue that we paid to see him and not his daughter Ruby + partner or the backing singers entertain us as they tried to for 2 songs mid-set.

Revitalised after the breaks, Rod went walking around the audience during "Sweet Little Rock & Roller" and kicked autographed footballs into the crowd during "Stay With Me". One even reached our level - sadly 20 yards or so to our left.

All in all, fantastic fun - even our kids who had been dragged along under duress admitted that it had been "better than expected"! High praise indeed.

Setlist
Infatuation
Twistin' The Night Away
(I Know) I'm Losing You
You Wear It Well
Tonight's the Night (Gonna Be Alright)
Can't Stop Me Now
Rhythm of My Heart
Forever Young
Gasoline Alley
The First Cut Is the Deepest
Have I Told You Lately
Sweet Little Rock & Roller
You're in My Heart (The Final Acclaim)
Stay With Me
Maggie May
+
Da Ya Think I'm Sexy?