So this is a bit different - Status Quo acoustic (or "Aquostic" if you go by their new album). A trip to the Roundhouse in Chalk Farm and he were not quite sure what to expect having not yet heard the album. Predictably, the "hardcore" on the Quo message boards had been ripping the concept to shreds without even hearing anything, but a full house turned up to watch a performance being beamed around the country on Radio 2 and the via BBC red button service.

The venue was pretty packed, so we settled for a spot under the moving camera arm - controversially on the right (but with no electric bass, this wasn't really going to be an issue!). And guess what? It was a really enjoyable evening. I think 99% of the people there seemed to enjoy it. Some songs worked really well - I particularly enjoyed "Na Na Na", "Reason for Living" & "Rolling Home" and to be fair some didn't - "Mystery Song/Little Lady" springs to mind!

As a one-off project I think it works. I can't see it being a sustainable change of direction - I can't see fans turning up show after show if Quo shy away from their high tempo electric shows (although an acoustic section in the main electric set could work). I would imagine sales of the album cover T-Shirts (with Francis and Rick semi-naked) would count as the lowest ever! 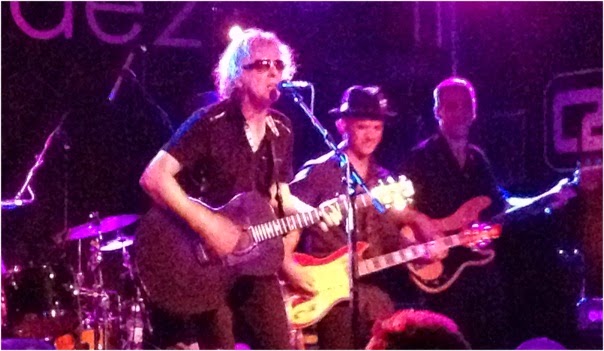 Every now and then something really special happens at a gig and you just can't put your finger on what. I've seen Ian Hunter a few times over the last decade and it's always been good. For a reason I can't pinpoint, this was extra special.

Was it the venue? (a first for me) and its intimacy? Was it the disregard for the other setlists from this tour? Was it the appreciative audience or the fine set of musicians on stage? Who knows, but this was a great show.
We had a decent spot towards the front on the left. Sound quality was excellent and this was really evident on fine versions of "Flowers", "Irene Wilde" and "23a Swan Hill". Ian told a brief story about Lynsey De Paul (who sadly died this week) and how she came up with the "Ariel Bender" name - originally applied to Mick Ralphs!

And for the first time in seemingly ages, I got to hear "All The Young Dudes" without Joe Elliot singing on it! All in all, a truly inspiring evening.