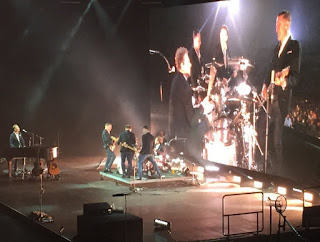 Night 2 and we have shifted to East London and a view from the side. A much more elderly crowd on this side of the arena meant we stayed seated for 80% of the show. Show was good - only real change was the live debut of a song from Bryan's "Pretty Woman" Broadway musical (with singer Samantha Barks), but sitting at the side feels like you are observing the show as opposed to being part of it, which was how last night felt.

Still, it was easy to enjoy the skills of all the musicians - especially guitarist Keith Scott who excels with this type of material.

Only downsides again were venue related - painfully slow to get in via the (entirely valid) extended security checks and general incompetence of bar staff.

Setlist
Ultimate Love
Can't Stop This Thing We Started
Run to You
Go Down Rockin'
Heaven
This Time
It's Only Love
Please Stay
Cloud #9
You Belong to Me
Summer of '69
Here I Am
When You're Gone
(Everything I Do) I Do It for You
Back to You
Somebody
Have You Ever Really Loved a Woman?
The Only Thing That Looks Good on Me Is You
Cuts Like a Knife
18 til I Die
I'm Ready
Brand New Day
+
I Could Get Used to This
I Fought the Law
I Can't Go Back (with Samantha Barks)
Straight From the Heart
All for Love 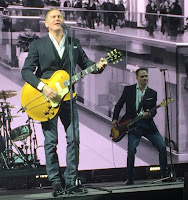 The first of 2 nights of Bryan Adams. A painful journey up to Wembley was followed by a long queue to get in. Luckily the compensation was our great seats - 2nd row central.

No support, meaning a 2 hour plus show from Bryan who was in excellent voice. A decent setlist too including a couple of well chosen covers made for a 9/10 evening. Always good to hear "Whiskey In The Jar" - whoever the artist!

Looking forward to tomorrow at the O2!

Setlist
Ultimate Love
Can't Stop This Thing We Started
Run to You
Go Down Rockin'
Heaven
This Time
It's Only Love
Please Stay
Cloud #9
You Belong to Me
Summer of '69
Here I Am
When You're Gone
(Everything I Do) I Do It for You
Back to You
Somebody
Have You Ever Really Loved a Woman?
The Only Thing That Looks Good on Me Is You
Cuts Like a Knife
18 til I Die
I'm Ready
Brand New Day
+
I Could Get Used to This
I Fought the Law
Whiskey in the Jar
Straight From the Heart
All for Love

The excellent Jim Cregan and his band are back in Sutton for a fun packed evening of Rod Stewart classics and a couple of other surprises including a random Beatles cover! Still including Thunder's Harry James on drums and Ben Mills on vocals, a packed house enjoyed a raucous sing-a-long on most numbers!

So last night, I was maybe 5 yards from the stage. Today, at least 120 yards - maybe more! Still, I was cajoled into paying over £100 to see the Stones at the vast London Arena (Olympic Stadium). And guess what - it was worth it!

Support came from Liam Gallagher who had the decency to include a decent amount of Oasis material - almost all of it much stronger that his other stuff. Vocals were a bit dodgy to start with, but improved and we took the opportunity to "borrow" some empty seats for his performance and sip an outrageously priced (£6.90 !) pint of beer.

Organisation at the stadium was slightly haphazard. A sensible "no bags" policy led to long queues (after we had got in) and even tubes of mints were being confiscated at the gate. Most of the stewards were unable to identify which seats were reserved and which were not.

This eventually led to us being "evicted" (with load of other people), but we were happy enough to stand on the pitch for the main act. They delivered a fantastic setlist and belied the fact that most of them are in their 70's! I went to see them in 1990 thinking it was probably a "a farewell" show, but this had more energy and quality than I'd have dared to expect.

The predictable "breather" was when Keith Richards sang his 2 songs which most of the audience clearly didn't know or care for. Surely he'd have been better singing another classic Stones song that he co-wrote (even if Jagger sang on the original).

That aside - a great evening! 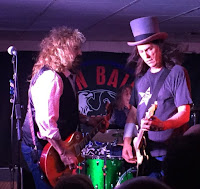 Some excellent news in that Dan Baird is over his recent health scare which forced him to miss the last tour. I believe this was only his second show back and it was a belter. Decent set, great band as always and fantastic to see Dan looking so healthy.

One very pedantic point - Dan usually does a CCR or John Fogerty cover in "Two For Tuesday"- often "Proud Mary", occasionally something else. To fit the song lyrics, why doesn't he do 2?

Setlist
Dixie Beauxderaunt
Knocked Out Cold
Sheila / Do You Wanna Dance
Damn Thing to Be Done
Two for Tuesday / Proud Mary
All Over But the Cryin'
Dan Takes Five
Nothing Left to Lose
Crooked Smile
Julie + Lucky
I Love You Period
Shake It Til It's Sore
Keep Your Hands to Yourself
Dang Me
Mon Cheri
Moving Right Along
Licka Sense
Runnin' Outta Time
Railroad Steel
Posted by MatthewB2 at 4:44 pm No comments:

Regular readers of this blog may recognise the name "Elio Pace" as the singer-songwriter who has been touring the last few years with his "Billy Joel Songbook" show, which I've seen a couple of times and can definitely recommend. Tonight is slightly different as he has persuaded David Brown - a member of Billy's band from the mid eighties to mid nineties to join him. The plan is to celebrate 2 of Billy's albums that David played on in their entirety - Glass Houses and An Innocent Man.

Presented with intros to the songs, anecdotes from both Elio and David plus a brief Q&A with the audience, the fantastic band breathed new life into the classic songs in a two and a half hour show. I remembered being impressed with David's playing at Wembley Arena in the early 90's, but it was a joy to see him play in such an intimate setting. Elio was clearing enjoying himself too and was on top vocal form. If they can arrange for this pairing to work again sometime soon then I will definitely be back.

Setlist
[Set 1: Glass Houses]
You May Be Right
Sometimes a Fantasy
Don't Ask Me Why
It's Still Rock and Roll to Me
All for Leyna
I Don't Want to Be Alone
Sleeping with the Television On
C'était Toi (You Were the One)
Close to the Borderline

Through the Long Night 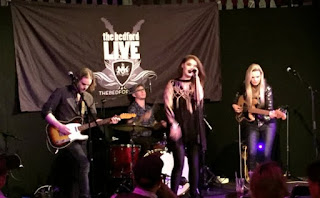 Rich and I had caught the end of Ilona's set supporting Bucket & Co a few months ago and she sounded really good. So, the opportunity of a few never before visited pubs around Wandsworth & Balham and a free show was one not to be turned down.

The support band - will need to look up their name! - were very pleasant and a decent crowd applauded warmly.

On that previously mentioned occasion at Raynes Park, Ilona had performed solo - here there was a full band. No surprise that I knew none of the material, but it was all very good with band and vocals excellent. We were lucky enough to be given a free 1 song charity CD afterwards  and the band were all easily accessible if you wanted a chat.

Found myself humming "Money's out the door, love's out the window" the next day.

Good enough that a return visit will definitely be on the cards!