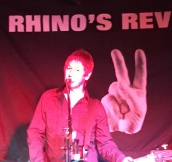 Rhino's Revenge (Rhino is Status Quo's bassist) at the famous 100 club on Oxford Street. Rhino gave us the normal mix of Quo tracks (some co-written by him) and a selection from the 1st and 2nd Rhino's Revenge albums. The latter isn't his best work in my view, but the live show is always good fun. Could have done with being able to hear his chat in between songs a bit clearer, but even though the backing band was without the normal family members, the music was loud and clear. Unlike the red lighting which ruined all attempts at a decent bit of photography! He seemed to be enjoying himself as we even got an unscheduled second encore of "Roll Over Beethoven". On the basis the band needed to work out keys and rhythm, I guess this had not been rehearsed!

Elio Pace plays a local show at the Epsom Playhouse Theatre. This is the third time I've seen his interpretation of the Billy Joel songbook and as previously, the songs are performed with skill and passion plus some interesting background on how they were written and musical influences. It's obvious that Elio is a huge Billy Joel fan and his solid band (including current Queen touring bassist, Neil Fairclough) complement the excellent piano work nicely. Well worth the short trip.

Setlist
Prelude/Angry Young Man
Movin' Out (Anthony's Song)
My Life
This Night
The Longest Time
Vienna
And So It Goes
Leningrad
Miami 2017 (Seen the Lights Go Out on Broadway)
New York State of Mind
Root Beer Rag
She's Always A Woman
Scenes From an Italian Restaurant
+
Goodnight Saigon
Allentown
Captain Jack
It's Still Rock and Roll to Me
Honesty
She's Got A Way
An Innocent Man
Just the Way You Are
Lullabye (Goodnight, My Angel)
We Didn't Start the Fire
The River of Dreams
Tell Her About It
Uptown Girl
+
You May Be Right
Piano Man